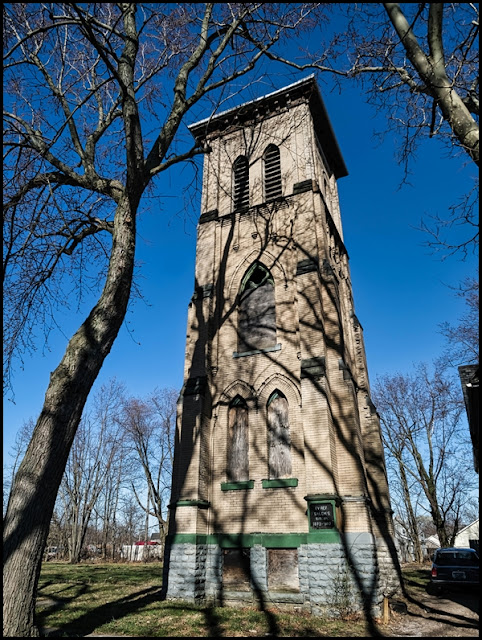 A view from my handlebars on the commute home from work this evening...a bell tower on Sherman Street (Buffalo's East Side), which is all that remains of this church. I've seen this church before (when it was still standing and in its current form) and have photographed it in the past, too. The cornerstone (or plaque) is still attached to the tower, and visible in this photo, reads:

The congregation was formed in 1873 and this church building was built in 1907 (they had other smaller structures prior). This was demolished in 2017 (source: Preservation Ready Buffalo).

My mom's side of the family were of German decent and lived on Buffalo's East Side. The aforementioned church where I was Baptized is only a few city blocks from this one and I wondered if any relatives worshiped here.

In the hundred years this church was operating there were likely many joyous, sorrowful, and also spiritual events here with the souls that sat in the pews. And now all that remains is the bell tower, which ushers and deacons likely rang by hand with a pull-rope.

And this is what I was thinking and contemplating on Good Friday as I pedaled and coasted on an extended ride home from work.