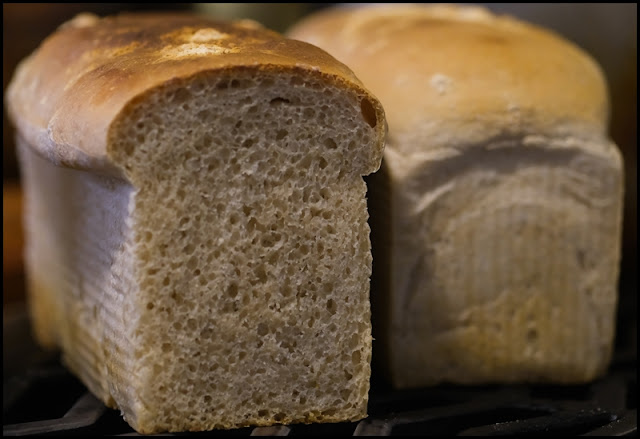 Last evening just before dinner I made a pre-ferment by scooping a cup or so of levain (sourdough starter) into a bowl and added a small amount of water and enough flour to make a somewhat stiff dough; mixing it until it just formed a ball but not kneading.The levain has been with me for three residences since it’s inception in the summer of 1999, the summer my life began to fall apart. Anyhow, I had dinner and went about my evening.

Later that night—after pausing my pandemic date (Netflix) and going to the kitchen for a glass of wine—I made an autolyse my mixing in a separate bowl 6 cups bread flour and 2 cups water. Again, mixing to form a ball but not kneading.

About an hour later, after the program was finished and just before bead, I combined the contents of both bowls into the bowl of an electric mixer with a dough hook, also adding a splash of olive oil and a bit of salt. After starting the mixer on low I then turned it to high and saw that the dough was a little stiff so added a some water.

While the dough mixed I woke my two old pugs and forced them outside to do their business, then set up the coffee maker for morning, brushed my teeth and also oiled two short pullman bread pans. By this time the dough was ready.

As naturally leavened dough is sticky, I doused it with a lot of flour and scooped it onto the counter, setting the mixing bowl in the sink and not washing it until morning. After kneading and folding the dough for a minute or so I cut it into two, shaped it, placed it into the pans, covered them with plastic and set them on the counter.

When I woke it was almost 10am, the latest I had slept in a long time (must have needed it), so I skipped zoom church service. The kitchen was cool, not see-your-breath-cold like it is in the winter, but cool, so I was not surprised the bread had not risen that much. To wake it up I placed it on the stove top next to a burner which was set on low. After feeding the old pugs and letting them out, had coffee, and showering, I shut off the burners and went to a coffee shop for more coffee where I wrote and read.

Arriving home the bread had risen about halfway, which is not nearly enough, so I went about my day...yard work, laundry, prayer and meditation, then later a swim at the JCC and stopping on the way home at the local co-op for a few things for dinner.

This time when I came home the bread was fully risen and just about to breach the sides of the pan so I preheated the oven straight away while I fed the dogs and let them out (what a life, right?) and unpacked my gym bag and groceries. Before I began dinner I sprayed the breads with water, which were now light in weight for their size because they were fully risen, and slid them into the oven, setting the timer on my phone for 15 minutes.

As I prepared dinner (penne aglio e olio con broccoli) I listened to NPR and had to keep pushing the dogs away lest I tripped over them as they danced at my feet with the smell of food cooking (all they want is to be pet and to eat). The timer went off, so I spritzed the loves again with water, rotated the them, and set the timer for another 15 minutes.

By the time the timer went off again dinner was ready. After removing the loves from their pans and setting them on the stove top to cool, I ate (and yes I fed “the boys” some scraps...they act as if they are starving).

After doing the dishes I cut a thin slice for this photo and ate it, relishing the depth of flavor from a 26 hour loaf of bread. then wrapped one loaf in plastic and put it in the freezer while I eat my way through the other this week. Bread is so incredibly simple to make. I’ve often said and stand by these words: It makes itself, we simply provide the conditions for it to thrive (it is alive until the oven). It doesn’t have to be a big thing and can be incorporated into the rhythm of your day. Anyhow, now if you’ll excuse me, I’ll step off my little soapbox and go make a couple slices of toast.