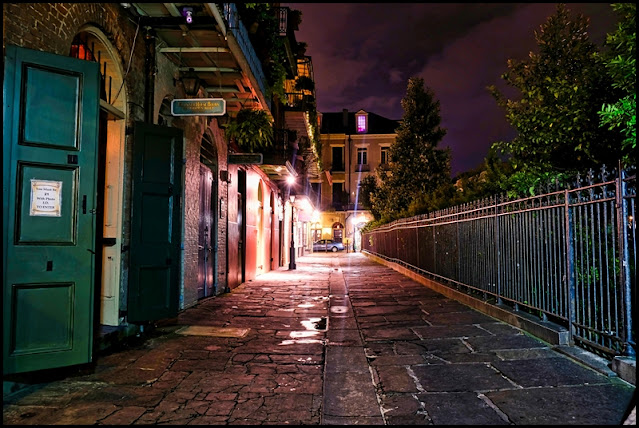 In the winter of ‘87-‘88 I would walk this alley almost nightly on the way back to the apartment. Avoiding Bourbon Street I instead hung out at a dive bar on Decatur. The bar, which is still operating today is called The Abbey. There was a female bartender who I would visit. I fancied her and believe she also fancied me. The problem was her very large Cajun boyfriend, who at first—because of his accent—I thought was from Brooklyn. Not wanting to get pummeled, the relationship never went further. Nonetheless, in addition to conversation and sweet glances she would offer me free bottles of Dixie Beer, which was still in existence then. The jukebox had a good selection, including The Clash, which is still my favorite band of that era.

The bar is located across from the French Market, which a the time was open 24 hours, I believe. On occasion the executive sous chef from from the restaurant at which I was employed would give me cash to purchase fresh okra from the market for the next day’s gumbo. So, tipsy from too much cheap beer and with the sound of the Clash song The Magnificent Seven bouncing around my head, and with camera slung over my shoulder, I would walk the darkened streets with a paper bag full of okra.

In retrospect, I truly believe that the short time I spent there was so influential on my young life (and affects me still) because of a few things. Mostly because I was on the cusp of so much and my life would change drastically in so many ways upon returning to Buffalo just a few short months later. Anyhow, our apartment was on the opposite side of the Quarter at Dauphine and St Peter, and Pirates Alley was one of the direct cross streets.

Having just returned from Europe for the first time I didn’t have many clothes—just what would fit into a rucksack—and only one pair of shoes; a pair of combat boots which clicked on the empty cobbled streets as I walked. New Orleans, specifically the French Quarter, is so incredibly storied and I imagined what it was like so many years ago. Doing so I felt surrounded by the many souls who came before us and before the area was populated by more than drunken tourists.

I have been back nearly a half-dozen times, the most recent was 2017 when this image was captured. There were plans last summer but like those of everyone else they were canceled. I hope to visit later this summer. As I sit tapping away at a keyboard on a chilly and dreary spring day in a coffee shop in Buffalo I long for the feel of sweat running down my back from the oppressive heat of a Louisiana summer. And when I do visit I’ll be sure to have a couple icy beers at the Abbey.

“Do you know what it means to miss New Orleans and miss it each night and day?”—Eddie DeLange and Louis Alter,  popularized by Luis Armstrong and Billie Holiday