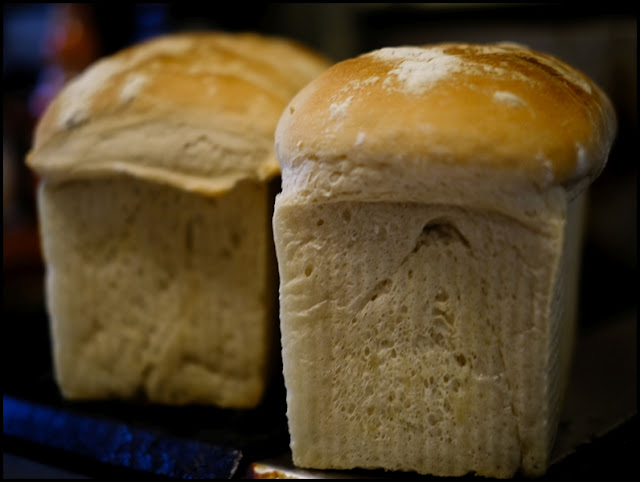 Yesterday morning before work I fed the sourdough starter which has been bubbling on counter tops or dormant in refrigerators through 3 residences in the past 22 years, and when arrived home fed it again so it would be fully active by nightfall.

After dinner and then going out in the evening I arrived home and made an autolyse (unleavened dough) and let it rest while mindlessly watching Netflix. Just before bed and while having a glass of wine, I let the two old pugs out to do their business and prepared the coffee maker for morning, then added some of the leaven—which was bubbling away—to the autolyse with a bit of salt and olive oil and mixed a dough. With the dogs now staring at me with their cloudy bugged out eyes in anticipation of a snack I cut the dough into 2 pieces and placed it in short pullman pans.

I slept deep without waking once—which is unusual for me—and in the morning the loaves were spilling over their pans, so much so that I trimmed excess with scissors lest it burned while baking.

So after letting the dogs out and pouring a second cup of coffee I scrolled the Internet aimlessly while the bread baked and filled the house with a delightfully yeasty-sour aroma. Slicing the bread for lunch the dogs danced at my feet for a snack they’ve come to expect. I toasted slices for a sandwich and biting in it tasted rich and sour and of so many other things.

It is things such as this, the simple act of making bread the old-fashioned way, uncomplicated things, which keep me grounded in the world we find ourselves. It reminds me of what is important.

“For we brought nothing into this world and we cannot take anything out of it.” ~ 1 Timothy: 6-7