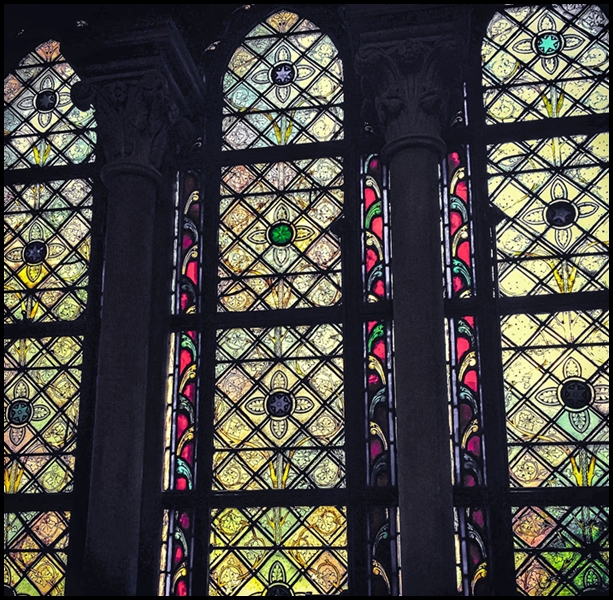 File this under: “Life is a Journey.”

Seven years ago today was a Saturday and the weather was hot and humid in Manhattan where this image was captured in a hallway of the immense and incredibly beautiful Riverside Church. I was one of about 60 people who had been ordained as interfaith ministers at a private service at a retreat center two days prior upstate along the Hudson River, and here we were waiting in orchestrated order to process down the nave of the church in front of 2000 friends and family for our graduation ceremony. Nervous, and just as the procession began to move, I snapped this photo with my cellphone as the afternoon light looked beautiful as it shone through the leaded stained glass. But in order to tell you where I am going with this post—and in fact why I am posting it—I have to get a bit personal without revealing too much.

At the time of this photo I was 52 and started the seminary program two years prior at the age of 50. This was a pivotal age for myself and three sisters. Neither of our parents had the luxury to make it to 50, and to be honest I never thought I would either. This thought has never been far away. Thus, as half-century approached and wanting to do something to honor both them but also myself, after contemplating it I enrolled in One Spirit Interfaith Seminary in Midtown Manhattan. To this day I do not know how I did it...traveling to NYC 22 times in 24 months while working chef’s hours and on a cook’s salary. All I can say is that their was a guiding hand at play, I truly believe this (if you know me in person I’ll gladly tell you the story of the day I fully intended not to enroll but was nudged to do it).

I did this not to be the pastor of a church, though am licensed to do so, but more for growth and self empowerment. In the process I became financially broke (not that I had money to begin with), and still am, but wealthy in so many other ways. Attending this program at midlife made me look at myself and I actually liked what I saw, even with all my flaws. But mostly, it removed fear. And that is the point of this post.

We as humans are capable of more than we know. I was terrified that I wouldn’t succeed in either of these programs but I did. We are stronger than we know or allow ourselves to believe. The shadows of my parents deaths have been close my entire life, and now I realize it was they who were guiding lights. In a few short months I turn 60 years young and am excited to see what the next decade brings (inshallah).

And this is what I was thinking while on lunch break today in the basement of a group home where I cook for the formerly homeless and looked at this photo almost to the minute of when it was captured 7 years ago. Life is a journey. It can be difficult, very difficult at times, almost to the point that you don’t know if you can make it or carry on. But you do and you will. It’s a journey, and it’s also beautiful. Don’t let your fears hold you back.