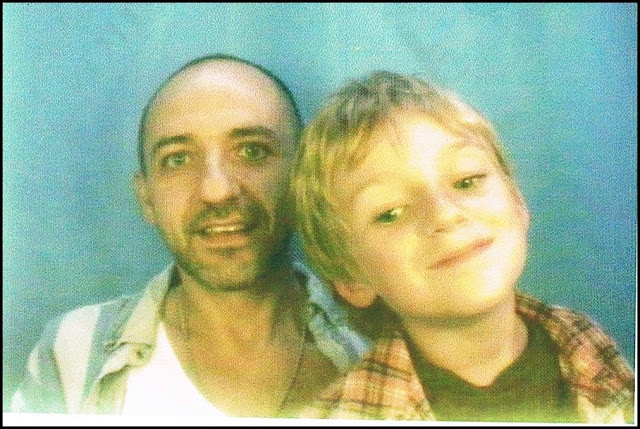 This faded and grainy photo has been on my refrigerator door for so long it’s barely noticed. Twenty years to be exact. For whatever reason I noticed it today and saw that it was dated August 31, 2001; twenty years ago yesterday. It stopped me in my tracks.

At the time I was 39 and my son was 6. It’s interesting to see that I am smiling; during that period of my life I was stunned. I’d separated from my wife just a year prior, had just purchased the old house in which I still reside, and was working my first year as chef at a private city club, a tenure that would last 15 years.
A few months after this photo, on Halloween, the ancient steam boiler that heated the uninsulated house, exploded. That winter—our first winter there—not having money to fix it, we slept in sleeping bags. My son thought it was fun, I was terrified. It was also around this time that I had enrolled in college for the second time in attempt to pursue a bachelors degree. Given the demands of working as chef and also being a single father, I dropped out.

Now, 20 years later, my son is in law school and I am a proud dad. I still (to quote the comedian Louis CK) "less than have no money" and my house still needs more repairs than I care to mention (and in fact may be sleeping in a sleeping bag again this winter). But since that time I have graduated from seminary (somehow traveling to NYC 22 times in 24 months while working as chef and living paycheck to paycheck). I’ve also, last year, completed a bachelors degree, graduating magma cum laude. But here’s the biggest thing…fear has been removed (for the most part). When I look at this photo I may be smiling but was filled with so much fear.

I’ll go on tangent just briefly. There was one hot June day in 2014 while on retreat in the Hudson Valley. Just hours before ordination I was worried (afraid). I was not worthy, who the hell did I think I was? I felt like an impostor. So, alone in my room, I prayed a short prayer, one which I’ve said many times since, and sent it out to the Universe… “Remove my fear and replace it with your love.” And no, I’m not going to get all holy roller on you (as it is I often lose social media followers with a post like this, and that is okay).

What I am attempting to say is that at the time of this photo I had so much right in front of me and so much ahead but could not see it. We all do. We simply need accept it. It’s not always easy, and I of course do not feel it or see it everyday, but fully believe it to be true. Life is a journey, not a destination. Today will soon be yesterday and then yesteryear. This is what I was thinking when this photo caught my attention. But as usual I’ve gone off course in the conversation. I’ll step off my little soapbox.