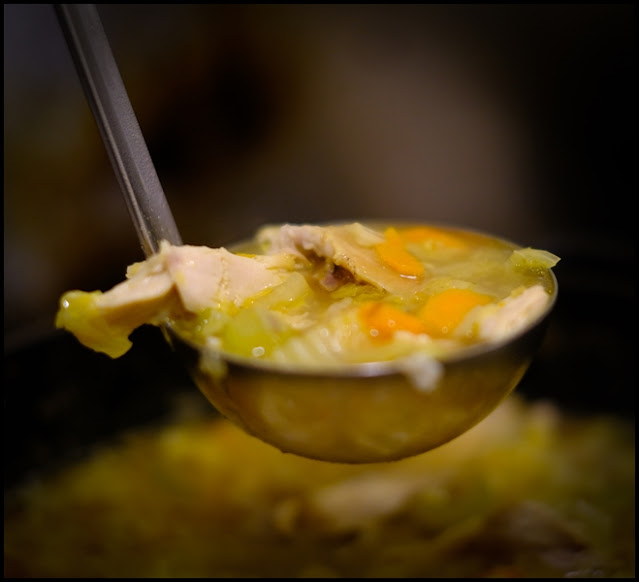 It’s interesting how the sense of smell can conjure memory and emotion decades later, this is in fact the strongest memory sense. Yesterday as I shuffled through my house wearing a bathrobe and double layers of sleepwear while enduring a particularly difficult bout of the common cold the chicken and cabbage soup simmering on the stove brought me back to my grandmother’s house as a child 5 decades ago. This was my dad’s mom, who spent the majority of her life in this country but spoke and cooked as if it were still the country of her birth. I don’t remember her making chicken and cabbage soup—it’s something I made to aid my body’s defenses—but the smell of simmering chicken and cabbage (maybe  it was her stuffed cabbage rolls) is what brought me back to that place.

As I write this it is my third sick day off work and fifth or sixth being sick, but thankfully am on the mend. I had energy today to walk to a coffee shop and then a pharmacy for more Vitamin C, etc. And no (thankfully) it is not COVID, the symptoms do not align and to be safe I took a home test.

But what I did have (and still do) was no joke, I was down for the count. It is really not like me to call in sick, let a lone 3 days in a row! When I worked as a chef in the pre-pandemic world, if sick I would go to work and simply power through it. This is what many do in the restaurant world, no work equals no pay. But I digress as I often do, I’ll refocus.

Slowly walking to the coffee shop this morning, in that sort of daze of being on the backside of illness can cause, made me remember how fragile these shells that house our souls are. A perfectly healthy human can be fine one day and struck ill the next without warning. While this has been the sickest I’ve been in a long time I also realize how fortunate I am. What I have is not life threatening. Some who are struck ill do not recover. Many do not make it to the age I am now. This is what I was gratefully thinking as I slowly walked the city streets this morning while wearing a mask but feeling clammy. At each step felt my foot touch the ground and connect with the earth.

For someone who claims to “live simply” I sure am busy a lot. Sometimes my body tells me to slow down but I don’t listen. Other times—such as this time—when I don’t listen it gives me a gut punch and forces me to listen, forces me whether I want to or not, to stop. To simply stop.

Often I forget how beautiful life is. All of it. These last few days which were spent mostly in bed or watching movies have offered me time to reflect on that...the beauty of life. But now I’m just sounding hokey.

This said, despite being sick I never lost my appetite and cooked for myself. One of the things I made was a pot of spicy chicken and cabbage soup with ginger and garlic. Most if not all of those ingredients are said to boost the body’s immunities. I ate slowly while watching Netflix with two elderly pugs staring at me (they were lucky enough to eat the chicken skin). And while I did it tasted great. Memories flooded back, but I also thought about tomorrow.

Tomorrow I return to work, and am planning on taking it slow...listening to my body. 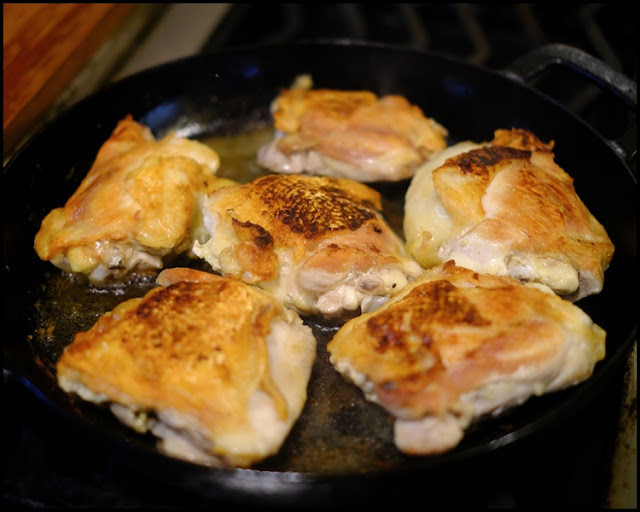 Spicy Chicken and Cabbage Soup with Ginger and Garlic

Heat 2 tablespoons of the oil in a heavy non-stick skillet large enough to comfortably hold all 6 thighs (I used a cast iron skillet). Add the thighs skin-side down and cook over high heat until golden brown, then turn them over and brown the insides as well. Remove to a plate and set aside.

In a large soup pot, combine the 2 remaining tablespoons of oil a long with the garlic, ginger, and hot pepper. Cook slowly over medium heat while stirring until the garlic and ginger is golden brown, then add the onion, celery, carrots, and turmeric. Cook and stir the vegetables and spices for about 5 minutes; sweating them without browning.

Add the cabbage, chicken broth, and salt, then stir and fold everything together. Add the browned chicken thighs to the pot, submerging them in the broth. Bring the soup to a boil, then lower it to a simmer. Cook the soup for about an hour, skimming any surface scum as needed.

After an hour, remove the chicken thighs and set on a plate, allowing them to cool enough to handle. Then remove the meat. Discard the skin and bones and shred the meat. Add the shredded meat back to the soup and simmer an additional 5 minutes. 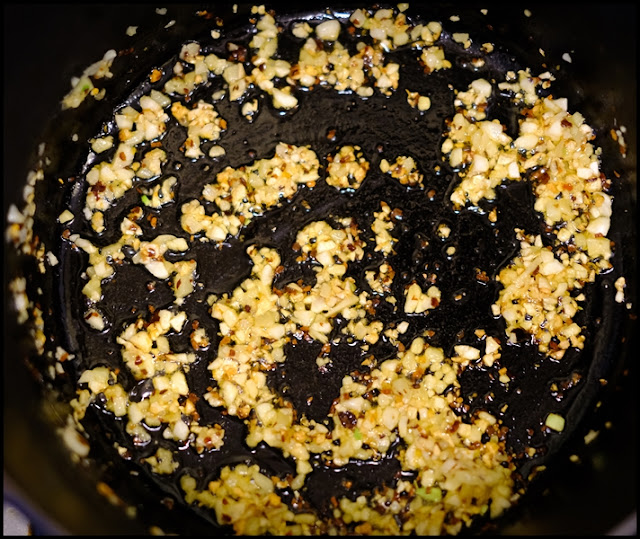