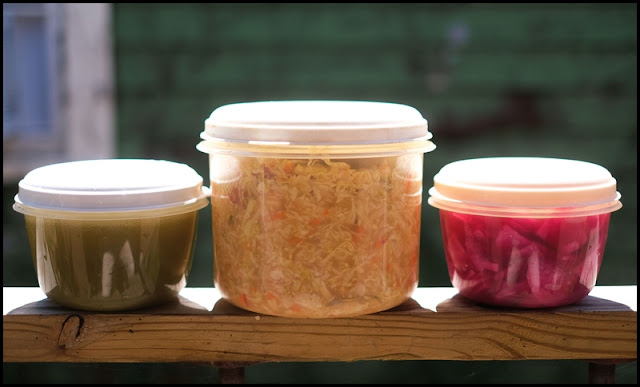 A couple weeks ago at the beginning of my "staycation" I began a few ferments. Given the weather my teeny kitchen is a bit toasty this time of year so they only took two weeks. Here they are re-packaged and ready for the fridge. From left to right... Louisiana-style fermented hot sauce (made with jalapeno), traditional sauerkraut, and Lebanese pickled turnips (colored pink with beet).

If you are interested or bored enough below is an article of mine which was published some years ago. It explains some things and includes recipes.

"Preserving was almost a mania with Mrs. Bergson....When there was nothing to preserve, she began to pickle." --Willa Cather, 'Death Comes for the Archbishop' (1927)

I'm the type of person that tends to wonder a lot, and I've been this way as long as I can remember. Being an avid bicyclist, for example, I often wonder what it was like before the advent of the automobile. People traveled less, no doubt, and worked close to home—indeed, to travel 20 miles may have taken the better part of a day. Now you may be wondering what this has to do with a food column. Well, to answer that I have to take you into my basement, vicariously of course.

Eating local is the food catch-phrase of the day, and rightly so. But a generation ago this phrase was rarely mentioned...maybe by a few hippies or other back-to-earth types. And a couple generations prior you'd no doubt have gotten odd looks if you asked if the peach on the counter was local. In earlier times it was a common skill to know how to preserve food without refrigeration or canning. We are, in fact, only a few generations removed from this. I still remember my grandmother telling me that when she was a little girl, having an orange this far north was something really special. With that thought in mind, stop for a minute and consider this...we once sustained on a diet where the food was in season and primarily raised or grown in the region where we live. This is exactly what I was pondering as I did a yearly inspection of my heating system on a chilly September morning.

Like many old houses, mine was built on a partial basement; it’s a small area, supporting only a portion of the house. It was undoubtedly intended as a partial foundation and--just as important at the time--a place to store food. In the cold months it would be warm enough to hold vegetables and other perishables without freezing (where they undoubtedly would have in the house proper on a frigid Buffalo night).

With this thought in mind I tried to imagine what it would have been like to live in our region back then. And two questions immediately came to mind: how the hell did they keep warm, and what did they eat in the dead of winter? Various smoked and salted meats probably, but more obvious foods--and probably some of the more abundant at the time--were root vegetables, pickled vegetables, and preserves. And to me these probably were, and for the most part still are, like Buffalonians themselves: hearty enough to withstand our sometimes long and frigid winters. The seasons shaped the people and dictated what they ate. And as I stood sipping my coffee I tried to imagine the basement filled not with the boiler and its octopus-like appendages (that was obviously a later addition), but with root vegetables, cabbage, crocks of bubbling sauerkraut, pickles and more likely than not, a barrel or two of beer or wine.

While canning, pickling, and fermenting are regaining popularity, their original importance in our regional diet cannot be overstated; these are foods that developed out of necessity in the days before refrigeration. And the etymology of some of the ingredients and recipes are particularly interesting. Salt, for example, is the ingredient that none of these recipes can due without. But this simple mineral that we may find so ubiquitous and innocuous today is actually where the English word “salary” and the French word “argent” (money) are derived. At one time it was so valued that Roman soldiers were paid a salarium argentums, or “salt allowance.” On a more local scale, the Erie Canal was at once known as "the ditch that salt built," because one of its original cargoes was salt.  And referring to the prepared recipes three come to mind; preserves, pickles, and condiments. The name preserves is an obvious one as it so closely resembles the word preserved, but the latter two are less overt but no less interesting. The word pickle is said to come from the Middle Dutch pekle, meaning solution or brine, whereas the word condiment comes from the Latin condimentum; its derivatives are condire and condere, which mean to season, pickle or store.

Most fermented recipes initially have high concentrations of salt but when made correctly they are not necessarily salty and are in fact naturally flavorful and good for you. Fermentation inhibits the grown of harmful bacteria but provides the right conditions for good bacteria, or probiotics; mainly, Lactobacilli, which is the bacteria found in yogurt, sauerkraut, and a host of other naturally fermented foods. And when vegetables are fermented they actually create nutrients during the process, mainly B vitamins, but also folic acid, riboflavin, and niacin. The people of Bulgaria consume more fermented milk products per capita than any other population in the world, and they also have some of the longest life spans. The lacto acid bacteria that is produced specifically in fermented milk (yogurt and kefir) is in fact named after that region, Lactobacillus bulgaricus.

The website of the Mayo Clinic states that there is growing scientific interest into the research of these natural probiotics. They go on to say that there is encouraging evidence that probiotics may aid in reducing many physical ailments; mostly gastrointestinal but also eczema and the reoccurrence of bladder cancer. And if you’re daunted by the thought of having to eat large quantities of lacto-fermented foods to reap their probiotic benefits think again. In their 50 page manifesto on fermented vegetables, Making Sauerkraut and Pickled Vegetables at Home, by Klaus Kaufmann and Annelies Schoneck, the authors say that “Our body certainly does not need huge amounts of lactic acid fermented vegetables. Small amounts taken regularly are quite sufficient to initiate many healing processes.”

Said simply, pickled and fermented foods are the original comfort food. In this age of everything being hyper-fast, it’s really refreshing to prepare foods slowly, sometimes really slowly. This column will be whisked to the editor’s office via the internet. I can’t see it go, it just does. On my counter is a batch of sauerkraut, pickled turnips, and ten-year-old sourdough starter, and with them I can engage all of my senses. I can see them, smell them, feel them, taste them, and if I listen closely enough, I can even hear them bubbling. But taste is the best part.

Select a variety of mixed vegetables and hot peppers. Peel, seed, and dice them as necessary. Place them in a bowl and cover them with salt water (½ cup salt to every gallon over water). Weight the vegetables with a plate to keep them submerged and leave them at room temperature overnight. The next day drain the vegetables and rinse them; discard the salt water. Place them into a jar or other suitable vessel. Make a brine using equal parts vinegar, olive oil, and water; add salt, herbs, and spices to your liking. Weight the vegetables to keep them submerged. Refrigerate for up to a month.

Peel and grate the turnip. Sprinkle it with the salt and mix. Taste the turnip; it should taste salty but not overly so. Transfer to a container that is wide enough to fit a few small plates. Press the turnip down with your hands and weight it with plates. Cover and leave at room temperature. After a day it should have released enough of its own liquid that it is submerged, if not, add enough salted water to cover the cabbage.  After 2 or 3 days small bubbles will appear, after about a week or so it will begin to smell and taste distinctively sour. Depending on the temperature of your kitchen the sauerruben will take between one and three weeks to sour completely. Taste it as often as you like and when the flavor is to your liking transfer the container to the refrigerator to slow its fermentation.

Combine the turnips, beets, onions, and jalapeno in a container that is wide enough to fit a few small plates. Press down on the vegetables with your hands to release some of their juices. Combine the water and salt in a bowl and pour over the vegetables. Weight the vegetables with plates; they should be completely covered in salt water. Cover and leave at room temperature. Small bubbles will appear within 2 or 3 days, after about a week or so it will begin to smell and taste distinctively sour. Depending on the temperature of your kitchen the turnip will take between one and three weeks to sour completely. Taste it as often as you like and when the flavor is to your liking transfer the container to the refrigerator to slow its fermentation.

Mix all of the ingredients together in a large bowl. Transfer to a container that is wide enough to fit a few small plates inside it. Press the cabbage down and weight it with plates. Cover the container and leave at room temperature. After a day it should release enough liquid that it is submerged, if not, add a little salted water.  After about 2 days small bubbles will appear, after about a week or so it will smell and taste distinctively sour. Taste it as often as you like and when the flavor is to your liking transfer the container to the refrigerator to slow its fermentation.

Remove the outer leaves of the cabbage and cut the head in half and then quarters. Cut out the core and discard it. Slice the cabbage as thin as you are able and put it in a large bowl. Sprinkle with two or three tablespoons salt and mix. Taste the cabbage; it should taste salty but not overly so. Transfer the cabbage to a container that is wide enough to fit a few small plates. Press the cabbage down with your hands and weight it with plates. Cover the container and leave at room temperature. After a day the cabbage should have released enough of its own liquid that it is submerged, if not, add enough salted water to cover the cabbage.  After 2 or 3 days small bubbles will appear, after about a week or so it will begin to smell and taste distinctively sour. Depending on the temperature of your kitchen the cabbage will take between one and three weeks to sour completely. Taste it as often as you like and when the flavor is to your liking transfer the container to the refrigerator to slow its fermentation.