A majestic building à l'heure bleue, and another really useful thing for a bicycle... 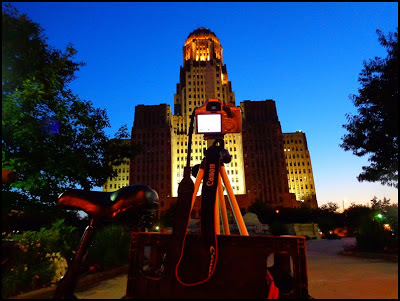 I've posted about a few of these things prior, but tonight the conditions were simply optimum. I had come home from a meeting with our meditation group and then sat on the front porch with a glass of red wine. The sun was just setting and there was not a cloud or breeze in the sky...beautiful. Glancing to my left I could see our majestic City Hall in the distance; it was already illuminated. Tonight, I thought to myself, would be a great night to take some pictures of it. I wanted to catch it at that magical time just after the sun sets (the blue hour, which I posted about here). Anyhow, knowing that I only had about a 20 minute time-frame (it's all about the light), I threw a couple cameras and a cheap tripod on my bike. The first photo that I took is actually the bottom photo (not sure why I listed the first last); it's a side view of the building as I approached it. Here it was still light enough that I could hand-hold the camera. This is actually my favorite of the four photos here. It's a shot of the City Hall which was built in 1932, and our new courthouse which was completed in 2011...sort of an "old-and-new" shot with the timeless moon hovering over all. Then as I pedaled around the front to face the building (where I encountered another photographer doing the same as I) it had gotten a bit darker and I knew that I'd need a tripod. I had brought my "cheap" tripod because folded up it is small and easy to carry. It is small enough that it fits on my bike to act as a stabilizing platform. It's pictured doing just that in the above photo (and in previous posts here and here). So how, you may be wondering, did I get a shot of the camera on the bike if the tripod was already in use? Well, interestingly, the above shot was taken hand-held (as still as I could possibly hold it) with a pocket camera. Not bad, huh? But if you look closely you can see the graininess in the above photo that doesn't appear in the first one below. And lastly, the middle photo below shows some of the detail of the top of the building with its observation deck. Click any photo for a slightly larger view. 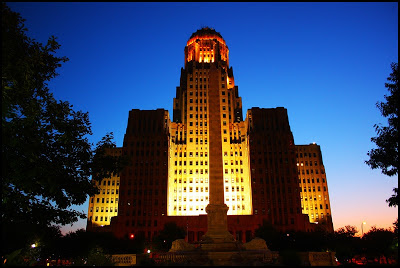 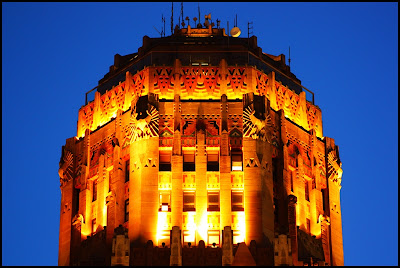 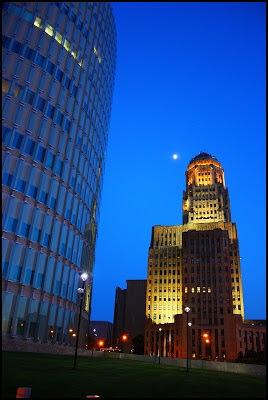