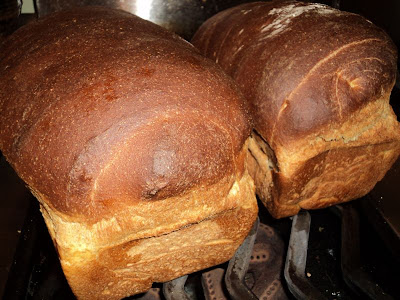 This is a variation of classic potato bread...the difference is that I substituted sweet potatoes for the white potatoes, used olive oil instead of butter, honey instead of sugar, and incorporated some whole wheat flour to give it a little flavor and texture. I've made this bread in the past (or at least some variation of it) and it is truly delicious: soft and flavorful, and makes great toast. It's also very simple to make. Below are photos of it being made (with brief explanations), and at the bottom of this post is a traditional written recipe.

I started with a two day old starter made with whole wheat flour, but this can ferment for as little as an hour or up to three or four days refrigerated. 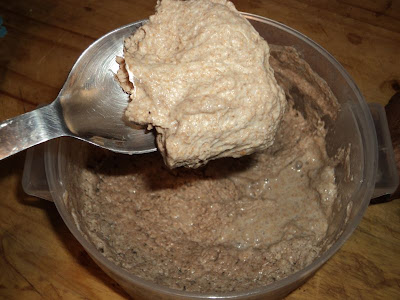 Then I cooked and peeled a couple sweet potatoes. 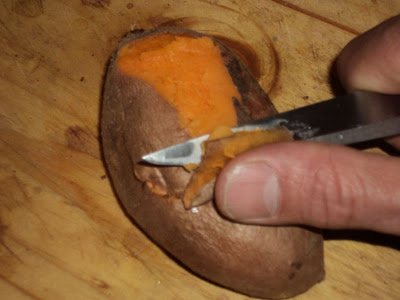 I then transferred the starter to the bowl of my mixer and added the cooked sweet potato along with a couple eggs, a bit of honey, and olive oil, and I mashed and stirred it with a spoon. 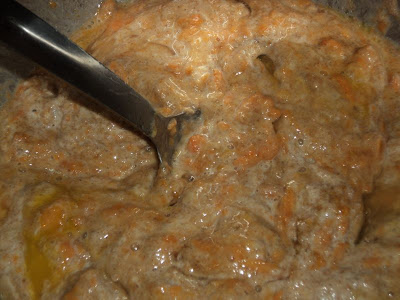 After adding bread flour and kosher salt I kneaded it to a soft dough. The potato emulsifies into and becomes part of the dough. 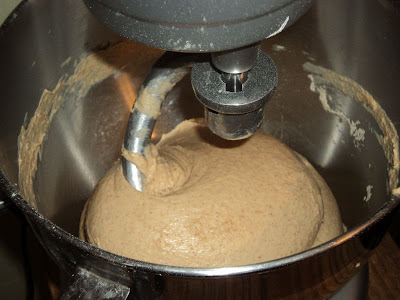 I transferred the dough to a rising bucket and refrigerated it while I went out to run some errands and make a brief stop at the health club. Here it is initially, then fully risen after three hours in the fridge 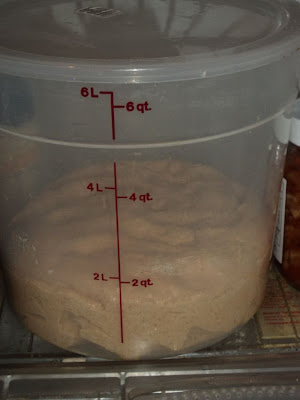 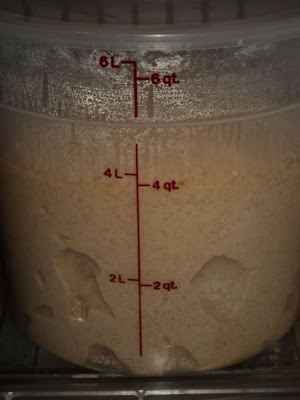 After cutting it into two pieces I shaped it and placed them into two loaf pans, which I then placed in a square plastic contains to rise (this acts as a sort of incubator and alleviates plastic wrap). Here they are initially, then fully risen after an hour at room temperature. 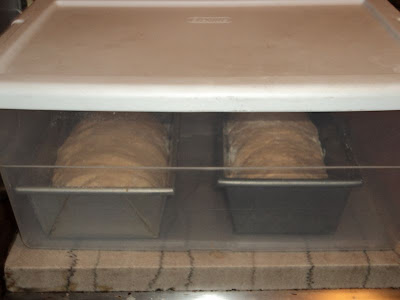 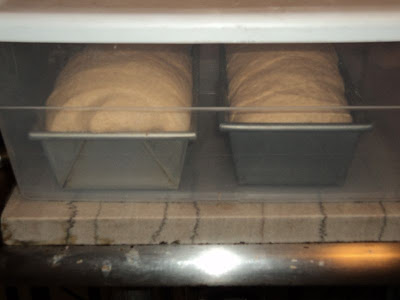 After preheating an I oven the breads were baked for about 30 minutes. 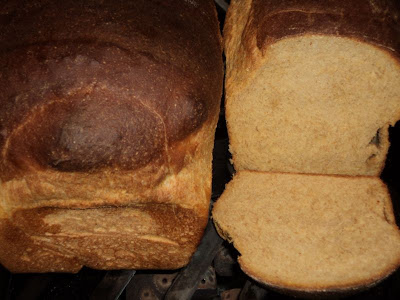 Sweet Potato Sandwich Bread
Makes 2 loaves
2 cups water
2 packages active dry yeast
2 cups whole wheat flour
2 medium sweet potatoes, cooked and peeled
1/4 cup honey
2 large eggs
3 tablespoons olive oil
4-5 cups bread flour
3 teaspoons kosher salt
Combine the water, yeast, and 1 cup of flour; stir to form a batter. Allow to ferment for 1 hour. Add the sweet potatoes and mash them into the ferment with a spoon or fork. Stir in the honey, eggs and olive oil, then add 4 cups bread flour along with the salt. Mix then knead the dough for 10 minutes (if it is too soft add an additional cup flour). Place the dough in a bowl at room temperature, cover it with plastic wrap, and allow it to ferment for 1 – 1 1/2 hours. Divide the risen dough into two pieces, shape them into loaves, and place them in oiled loaf pans. Allow the bread to rise for 45 minutes; meanwhile, preheat an oven to 425F. Bake the bread for about 30 minutes, rotating it twice for even baking. Remove the loaves from their pans and place them on a wire rack or towel to cool before slicing.
Urban Simplicity.
Email Post

Michelle said…
I only use whole grain flour to make bread. I can add dough conditioner and/or vital wheat gluten but what would you suggest if I do not use bread flour? I plan to pay attention to the consistency and my WW bread comes out moist with the addition of pototoe flakes but I just didn't want to screw this recipe up and I tend to make large quantities at a time for my family. Thanks for your help!
February 9, 2012 at 5:55 PM

Joe said…
Hi Michelle, Thanks for visiting. I also use mainly whole wheat and whole grain flours for my breads these days. And yes this recipe will most definitely work with whole wheat flour. But I would recommend two things. One is add a couple tablespoons of gluten, and also start with a preferment and a autolyse. you might want to take a look at the link below (copy it into your address bar). Thanks again for visiting and commenting. Let me know how it turns out or if you have any further questions.

Anonymous said…
I am enjoying this bread immensely! Thanks for sharing and the detailed Instructions. It is a very diff recipe than my usual sandwich bread. Lovely color and texture! Yum!
January 25, 2014 at 7:31 AM

Unknown said…
I am really looking forward to baking this bread! I am confused about the whole wheat bread, though. The ingredients say to use 2 cups of whole wheat flour, but the directions say to only mix in 1 cup. Is the other cup in a sourdough starter?
October 16, 2018 at 3:59 PM