Two More Beauties (and a something a little odd). 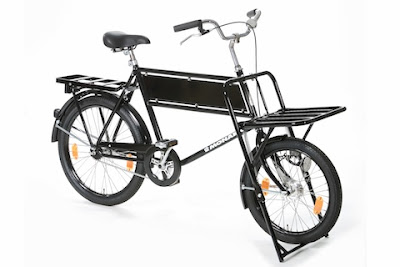 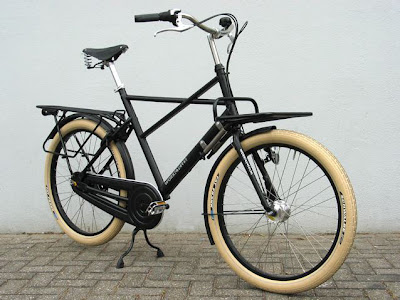 OK, first a couple things, and this is to my fellow Yuba Mundo riders out in the blogesphere. I am not planning on selling my Mundo, nor am I comparing these bikes to it...I love my Mundo and think they are truly unique and versatile bikes (not to mention the most comfortable bike I've ridden). But I am living vicariously as a rich man...you know the type, the guy who has a ten car garage to house all of his sports cars. Only with me it would be bikes. If I were wealthy I'd probably own a lot of high-end cargo bikes (but then I'd probably feel guilty for my greed and give them away).

Anyhow, I came across these bikes a while ago and think they look awesome, particularly the second one. Both are sold by Henry WorkCycles. The first one is called the Monark Truck (Baker's Bike), and the second is simply called Fr8 (a phonetic play on the word freight, no doubt). Click here to see more specs for the Baker's Bike, and here for the Fr8.

Now here's the thing that I find a bit odd. Take a look at the photo below. This is taken directly from a WorkCycle Site (but a different location), click here to see it.. It's their page advertising the Fr8 as their industrial bike (which it seems to be). What I find odd is that while the driver has that beautiful and plentiful front rack (oddly no rear rack) he is carrying his cargo in his hand. I don't know about you, but the reason I want a cargo bike is so that I don't have to carry stuff. And I'm also no marketing genius, but it seems to me it would be better to show this bike loaded with stuff rather than the rider driving one-handed carrying something with his front rack empty.

Maybe I'm being picky. It's just an observation but I felt like expressing it. I still think these are truly beautiful-looking pieces of machinery and would gladly own one. 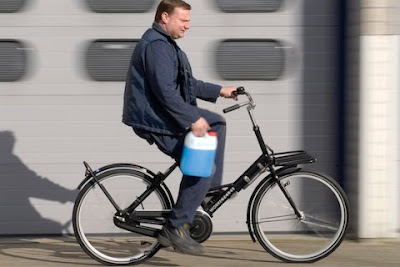 Dr C. said…
I see a Workcycles Oma parked up at work most days, its a really good looking machine with some good component choices. I remember reading the the pun-name FR8 (for freight) works in the dutch language too.

Sally said…
You are absolutely right, Joe, the marketing people must have goofed with the picture of the cyclist carrying his bottle...love your postings, hope you'll continue... Sally
July 17, 2010 at 1:28 PM

Steven Vance said…
I only realized the handheld cargo now that you've pointed it out.

I debated for months whether or not to get the Fr8 or the Yuba Mundo. I came to the conclusion that I could customize the Yuba Mundo to do more than the Fr8 and have it cost much less.

Jesse Smith said…
I had a chance to test ride a WorkCycles Tranport bike this weekend (very similar looking to these). It felt like the bicycle equivalent of driving an old Cadillac. You can really feel the solidity and momentum of the steel frame, and the seating posture makes it feel like you're sitting back on a throne.

Very different from my Giant Cypress hybrid. I am seriously considering getting a Dutch bike or a similar kind of city bike, but it's hard to commit to the idea when it's such a radically different ride.
July 18, 2010 at 5:43 PM

Joe said…
Jesse, I recommend trying a Yuba Mundo...awesome ride, solid as a tank, and you can carry whatever you need. Believe-it-or-not, they actually ride like a regular everyday bike. Good luck and thanks for reading.
July 18, 2010 at 9:46 PM

the_big_smile said…
Yes, it's realy funny, why that guy holds his cargo in his hand. Probably the cargo is too heavy for the rack? ;-)

@Jesse
Yes, try the Mundo! You will see, it rides like a normal mountainbike, just a little longer.
If you buy one, take a frameset an choose your own components that suit your needs.