5 Quotes about Peak Oil, 4 Views from the Parking Lot, and 1 Quote about Bicycles

"There are few problems which have greater potential to quickly unsettle the North American public and strain essential services than suddenly being denied access to fuel."
— Rick Munroe, from his article, "Fuel Emergency"
"Here in the United States we're now consuming about three gallons of petroleum per person per day. That's twenty pounds of oil per person per day. We only consume about four pounds of oxygen per person per day. We're consuming five times more oil each day, here in the United States than we are oxygen. We've become the oil tribe."
— Randy Udall, in the film Sprawling From Grace
"Oil depletion and climate change will create an entirely new context in which political struggles will be played out. Within that context, it is not just freedom, democracy, and equality that are at stake, but the survival of billions of humans and of whole ecosystems."
— Richard Heinberg, Powerdown
"The real problem is that we use too much oil. It's that simple and that difficult. If we truly want to reduce our vulnerability to high prices, the best way to do so is to reduce consumption."
— Richard Heinberg, author of Peak Everything
"I'd put my money on the sun and solar energy. What a source of power! I hope we don't have to wait until oil and coal run out before we tackle that."
— Thomas Edison, 1931 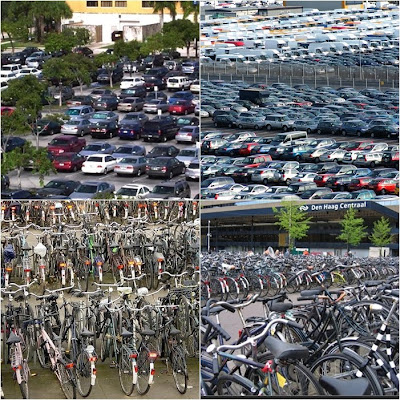 The bicycle is the most civilized conveyance known to man.  Other forms of transport grow daily more nightmarish.  Only the bicycle remains pure in heart.
~Iris Murdoch
Email Post

Well, there is only one little problem: There is no such thing as Peak Oil!
Oil is generated allways new.
Look for "abiotic oil" on the search enige of your chioce.

But we will suffer very high prices, just because most people believe the Peak Oil lie.
And so your quotes are defenetly right.

But we here in Europe will get the same problems, if we won't get fuel for reasonable prices.

By the way, climate change has nothing to do with our energy consumption, because it has nothing to do with CO2!
CO2 does not heat up the earth!
In the last 10 years the temperature of the earth rose by -0,02 degrees Celsius! So in fact there is a tiny drop of temperature instead of an rise!
But why are people believing in rising temperatures? It would be a very long story to tell right here.
If you are interested, look here for example:
http://www.climategate.com/
Or again ask the search engine of your choice for "climate gate" or "climategate"

But you are right, we should use less oil! The oil belongs to our mother earth and she needs it.
Using all that oil is not good for our environment.
Look at the Gulf of Mexico for example!

Joe said…
Stefan...Honestly I don't know what to think...there are so many conflicting reports on both sides, and I am not a geologist or scientist to know first hand. What I do know is that more people would benefit from riding bikes :)
April 27, 2011 at 9:44 PM

amoeba said…
There is a problem with the Abiogenic theory of petroleum origin. If it were truly correct, then why are the oil companies having to search for new oil fields that were formerly too expensive and difficult to exploit (e.g. Tar Sands)? The answer is of course, is that we are surely running out of oil. All you have to do is to look at the oil production forecasts. Hint, it's all about Energy Return On Investment. In the early days the EROI for oil was often >100:1, for bitumen from tar sands it's 2-4:1. When EROI falls to ~1 a field is dead.
http://www.theoildrum.com/files/Table_1.PNG

Now combine that declining resource with rapidly increasing demand from India and China and we have a crunch.
April 28, 2011 at 3:56 PM

the_big_smile said…
Never mind production forecasts. Nothing is easier to fake, than a forecast!

We really run out of oil, but only because there is a limited amount of oil per year that can be pumped. You can't pump more oil per year, than is generated!
And our greed for oil is limitless!

amoeba said…
the_big_smile,
Nothing is easier to fake, than a bogus fact!

amoeba said…
the_big_smile said...
"We really run out of oil, but only because there is a limited amount of oil per year that can be pumped. You can't pump more oil per year, than is generated!"

If we need more oil than can be pumped, supply and demand economics will dictate that oil prices will inexorably spiral upwards and for many oil will become unaffordable, for those that can't afford it, we will have effectively run-out of oil. And bearing in mind the rising wealth and demand of many outside the US and falling income in the US, many US citizens oil will no-longer be affordable.

Of course, that's true, whether or not the widely discredited and unproven abiotic / abiogenic theory is BS or not.
May 6, 2011 at 3:28 AM

I never went down into the depth of the earth, to prove for myself, how oil is generated. I can tell, there are arguments, that look like oil is generated different from what we are told.

Oil is kind of the blood the earth.
It is is needed to lubricate the tectonic plates. (Why do we have so many earthquakes? Rising numbers the last decades?)
It was OK for mother earth, to grant us the right to the oil we needed for all these years.
But we have to cut down or consumption really fast!
Otherwise Mother Earth will do the same to us as we would do to a mosquito that tries to get our blood.
May 7, 2011 at 6:28 PM

IIRC, that's the only thing you've said that is supported by science, but it is of course because of greenhouse gas emissions affecting the climate.

"Oil is kind of the blood the earth.
It is is needed to lubricate the tectonic plates. (Why do we have so many earthquakes? Rising numbers the last decades?)"

What scientific evidence do you have for this?

Surely, bearing in mind your 'abiotic' theory, this shouldn't happen.

Plate tectonics are the 'flavour of the month' - being blamed for all manner of ludicrous things, except those claiming plate tectonics as the cause of whatever crackpot theory is doing the rounds, need to show scientific evidence recent changes to tectonic trends.
May 8, 2011 at 2:05 AM

amoeba said…
Scary video about peak oil. For those who have been paying attention, it merely reflects what's already known. It also underlines the fact that unless Western Governments get their acts together, that the fact that 1 kg of food requires 1 kg of oil (at the farm gate - that's no packaging, transport to the shops or processing). Many people are going to go very hungry.