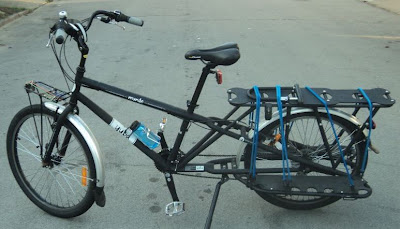 Here's a question to other Mundo/Xtracycle/Long-Bike/Cargo-Bike riders. How often do people ask you what the deal is with your bike? With me it seems almost on a daily basis (at least during the warmer weather when more people are outside). Cargo bikes are not very popular in my neck of the woods, so I suppose it would look a little odd to the uninitiated. What are some of the questions people ask you? The most common with me is: Did you build that? Another is: Is that difficult to ride? Today's was: Why is your bike so long? My first response almost was  that I had the Napoleon Complex (even though I'm not that short). Instead I just told them that it was built to carry stuff. They then asked me what I needed to carry, to which I answered, anything I need or want...
Email Post

Anonymous said…
It depends on the bike: with the Xtracycle I get asked questions on most rides: people tend to think that's a tandem because of the second set of handlebars for the Boyz. The Bakfiets being much bigger gets a lot more attention and I can generally expect to get into one or two conversations about it.
People generally think the bikes are interesting but often they clearly see them as 'cute' alternatives to 'real' transport like cars.
May 10, 2011 at 10:55 PM

Max said…
I usually have the Go-Getter bags attached to my Mundo, which I guess somewhat masks the stretched look. But the two seats on the back do get attention.
People often give the, "did you make it?, and often referring to the bike as a "contraption". We also get a fair amount of, "cool", "tight", and "sweet", from a wide age range of people.

My Christiania trike gets a good amount of the same type of attention, too, though with the added ice cream vendor comparisons.
May 11, 2011 at 12:40 AM

As a rule it is males that stop and look at it and check out the features. I watch them from afar as I am having a coffee or a bite in a restaurant or cafe. As Max mentioned, I have one getter bag. I am sure that I would have more comments if it weren't mounted.

When I am on or locking the bike, men ask why is it so big? Is it very difficult to pedal? How heavy is that thing?

I answer their questions every time. Most men under 40 get it, very few young women have understood it - I guess that it conflicts with the image of a minivan and a white picket fence for some of them.

My answer is similar to the the anwsers above.
The question I hear most is the "Did you build it yourself?" question. Almost everyone, I talk to asks this question.

And the question "What do you transport with it?" Is a very funny one, I think. I always tell a few things and in the end I mention my wife and my daughter.
Now you should know, that in Germany almost everyone believes to know, it is not allowed, to carry people on bicycle racks. And I have to explain them, that is true for usual racks on usual bikes.
The Mundo has a rack, that is sturdy enough, it has sideloaders to use as footrests and I added a stoker bar. So this is effectivily becomes a tandem for the police.

Yes and then are questions like "Isn't it very hard to ride?" or "How much did it cost?" (Wich I can't really answer, because mine is so very customized. I had to look up bills and use a calculator first to be able to answer this.)

I get asked at least once a week with the Mundo.