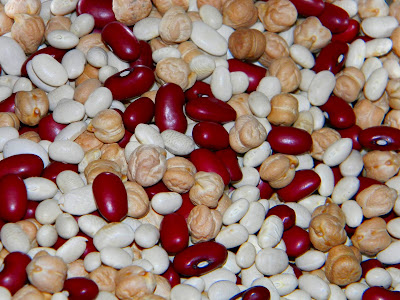 I made this soup/stew yesterday to utilize some of the turkey stock that was left over from Thanksgiving. It's a basic bean-and-pork soup or stew recipe, and I say soup or stew because it depends on how you like it. I made it thick (sort of condensed) so it would take up less room in the freezer, and when I ate some for dinner tonight I mixed it with cooked brown rice, making a sort of arroz con puerco...but to eat it as a soup simply add a bit more broth or water. The recipe below is based on white beans, but I used white, red, and garbanzo in this recipe. The below recipe also contains ham (which I actually prefer in this soup because of it s smoky flavor) but I used clay-pot roast pork simply because I had it on hand. Anyhow, this is easily multiplied to make a larger batch, it's great for the colder weather, it is a meal in itself...and it makes the house smell god while it's simmering. 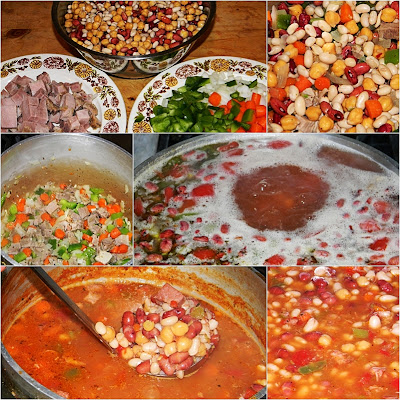 Soak the beans in water overnight, or at least 1 hour. Heat the olive oil in a heavy pot and sauté the ham, pepper, onion, celery, carrot, garlic, hot pepper, fennel, and rosemary for about five minutes. Add the beans, salt, black pepper, tomatoes and broth. Bring the soup to a boil then lower it to a simmer. Cook the beans for about 90 minutes, or until the beans are very tender. If too much liquid evaporates, add more stock or water as needed.
Email Post