A Bevy of Swans (and how to build them) 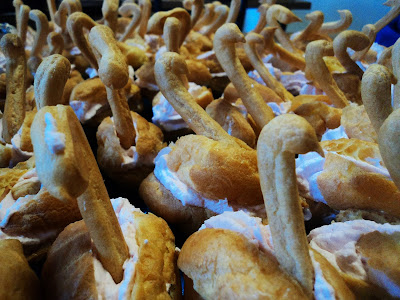 Before I talk about the above photo I have to mention how interesting I think it is the different names for groups of birds. A group of swans on the ground, for example is a bevy or a game, but if they are in flight they are refereed to as a wedge. The oddest one, I think, is what a group of crows are called: a murder of crows. Creepy. For a full list click here.

Anyhow, the above swans are some that were served at a brunch last week. They are so simple to make yet people are thrilled over them because of their swan apearance. They are made with a pastry, which refered to in its French name, is called pâte à choux, which translates loosely as "cabbage pastry" (or literally as cabbage paste). And no the dough does not have cabbage in it as an ingredient; the reason--I assume--that it is called such is that when the dough is baked in round balls (such as cream puffs) it comes out looking a bit like little cabbage balls.But what is truly unique about this dough is that it is a cooked dough, meaning it is made on the stove top and then baked.

The images below are how to cut the bodies after they are baked; they can be filled with any number of custards or creams. The video will show you how to pipe the dough out into the shapes (video credit: Master Pastry). For a basic recipe for the dough visit Just Hungry, and if you'd like to see step-by-step of the dough being prepared, visit Michael Ruhlman. 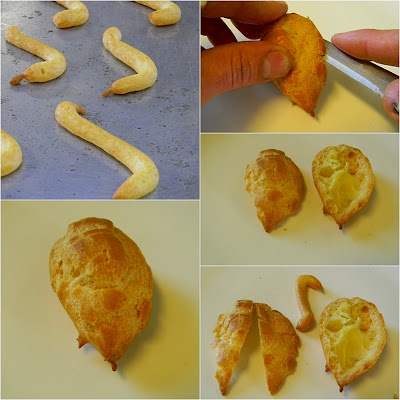