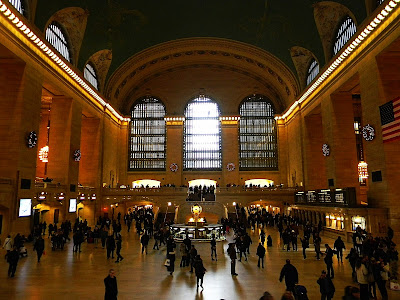 I thought I'd share a few photos from my recent trip to NYC. The above and the bottom are two of my favorites. When I was a child and would run through the house my mom would sometimes yell, "Slow down...whad'ya think this is, Grand Central Station?" I never knew what she meant until I first visited it years later. That's it pictured above. Those directly below are a collage of some street scenes. The one on the left was taken on 6th Avenue in Chelsea looking south towards Greenwich Village (dusk and dawn, I think, are the most magical times of the day...they also offer really interesting light for photos). The photo on the upper right (below) is of the Gem Spa in the East Village (it was a hangout of not only bands such as the New York Dolls (click here for a picture) and the Ramones, but also Allen Ginsberg and other Beatnicks (and later hippies). The photo on the lower right (of the collage) was just an image I thought looked interesting...the way the neon sign glowed in the night. The bottom image is one of my favorites not only because of its fame and beauty but also because of a personal connection. While I have never lived in NYC I have been there dozens of times, and in the mid-1980's I went to school about an hour north and spent many drunken weekends there. Sunday afternoons were often spent drinking wine in Washington Square Park, whose entrance is pictured below. My personal brush with fame in that park took place on July 4, 1986, where we (friends and I) shared a bottle of wine with a drunken and crazed guy who claimed to have been Jaco Pastorius. I'm not sure if it was him or just a crazy guy, but at one point he jumped up on a wall and played Star Spangled Banner--Jimi Hendrix style--on an electric bass. Whether it was him or not needn't matter (but I believe it was)...it's a fond memory. Click any photo for a larger view. 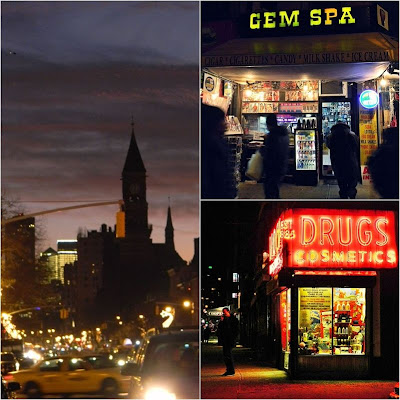 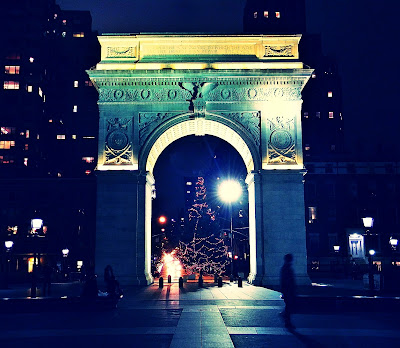