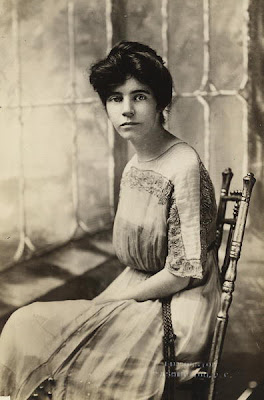 Alice Paul
January 11, 1885 – July 9, 1977
Feminist, Suffragist and Political Strategist
Alice Paul was the architect of some of the most outstanding political achievements on behalf of women in the 20th century. Born on January 11, 1885 to Quaker parents in Mt. Laurel, New Jersey, Alice Paul dedicated her life to the single cause of securing equal rights for all women.

Few individuals have had as much impact on American history as has Alice Paul. Her life symbolizes the long struggle for justice in the United States and around the world. Her vision was the ordinary notion that women and men should be equal partners in society.

(The above text and photo were culled from the website of The Alice Paul Institute, for additional information click here.)

"I never doubted that equal rights was the right direction. Most reforms, most problems are complicated. But to me there is nothing complicated about ordinary equality."

"Mr. President how long must women wait to get their liberty? Let us have the rights we deserve."

"Too many terms corrupts politicians so they only want to be reelected."

"The Woman's Party is made up of women of all races, creeds and nationalities who are united on the one program of working to raise the status of women."

"This world crisis came about without women having anything to do with it. If the women of the world had not been excluded from world affairs, things today might have been different."

To read five more quotes from people that inspire me, click here.