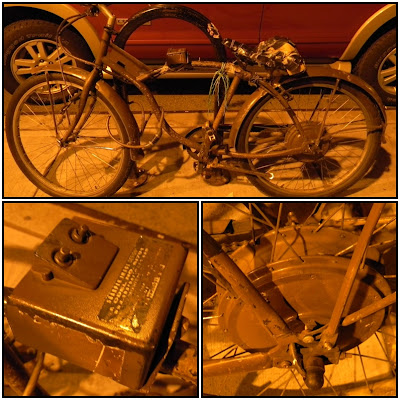 I love old bikes...especially those that are still in use. This is an example; I came across it locked to a stand in Greenwich Village last night. In a city like New York you see plenty of old bike leaning around (probably less likely to get stolen than a shiny new one), but what caught my eye about this one as I was walking by was the box on its crossbar (looks like a control box of sorts). And at closer inspection I saw the enlarged rear axle. Could this be an early electric bike...possibly a WWII bike? It looks like it weighs a tone. Anyhow, I just thought I'd pass this out to the blogesphere. If anyone has any thoughts on this I'd love to hear them. You've got to admit it is a pretty cool looking bike.

kfg said…
Looks to be an Opel motor bicycle (moped in modern parlance). The frame design allows for the mounting of a 50cc gas engine below and fuel tank above, but this one is obviously electric. Cool beans!

It's sufficiently both rare and historic that I wouldn't use one for a street bike.