Spiced Brown Rice and Beans with Venison and Broccoli 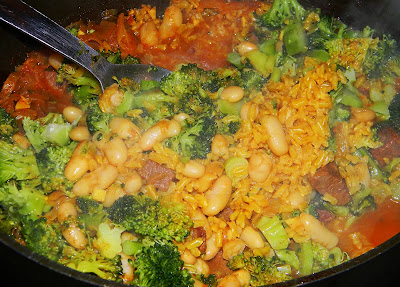 I remember hearing the statement--and I'm paraphrasing, I'm sure--that if you teach a person to play a song they can play that song, but teach them to play the instrument and they can play many songs. The reason I mention this is that this is just another example of an endless number of dishes that can be made by using nearly the same recipe, or at least the same method of preparation. This brown rice dish is just a variation on a theme of any stove-top brown rice pilaf. Over the past few years I've slowly gravitated towards cooking and eating mostly whole-grain and whole-wheat foods...I figured I eat enough bread, pasta, and rice, that I might as well eat the healthier stuff. And it's interesting in that along the way I've actually begun to like the whole grain varieties much more than their refined versions...whole grains, to me, have more character; more flavor and texture.

Anyhow, to make a recipe like this you merely saute some items, season them, add rice and stock, then let it cook...simple, but there are a few things to consider (especially when it comes to flavor and texture). The first is the liquid-to-rice ration. This varies from rice-to-rice, but generally speaking with white rice the ratio is 1 cup of rice to 2 cups of boiling liquid, whereas brown rice is 1 cup of rice to 2 1/2 (sometimes more) of boiling liquid. Cooking times vary as well. White rice takes 18-20 minutes to cook, whereas brown rice takes 40-50 minutes to cook. And when it comes to flavor, the liquid is makes the biggest impact...as the rice cooks it is not merely coated with the flavors of the seasonings and liquid, the grains actually absorb their flavors. Therefor, if rice is cooked in water it will have a very simple rice flavor. This, of course, is OK, and even suggested when the rice is being served as a side dish and paired with highly seasoned foods, but when it is the main course the rice should be more full flavored itself, and it's for this reason the rice in this instance should be cooked in broth. The broth absorbs into the rice and the rice takes on the flavor of the broth (and other seasonings). While the recipe in this post contained venison and was seasoned with Near East spices, it could easily have been made with chicken and Spanish or Italian seasoning with just a few alterations...more variations on a theme. Here it is in pictures; the recipe follows. 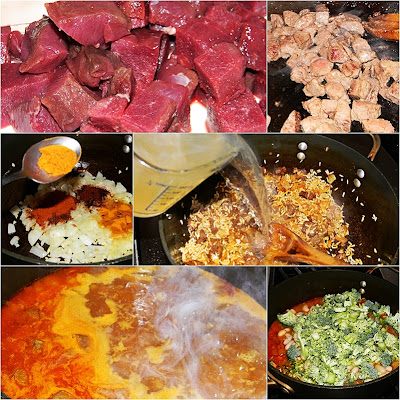 Spiced Brown Rice and Beans with Venison and Broccoli
Heat a heavy deep skillet with either vegetable oil or clarified butter, then add a pound or more of diced venison (or chicken, lamb, beef) and brown it lightly. Remove the meat to a plate and in the same hot pan add a diced onion and a couple cloves of minced garlic; cook for a couple minutes until the onion just begins to brown. A a teaspoon each of turmeric, curry, tandoori spice, chili powder, and kosher salt; stir for a minute over the heat to bring out their flavor. Add 1 cup of brown rice, stirring it to coat it in the oil and seasonings, then 2 1/2 cups of boiling broth. Lower the heat to a simmer, cover the skillet with a tight fitting lid, and cook the rice untouched for 30 minutes. Then add 1 cup of cooked (or canned) and rinsed white beans and a head of broccoli that has been course chopped...don't stir these in, just  allow them to rest on top of the simmering rice and steam. Cover the skillet again and cook for another 10 minutes. Check the consistency of the rice...if it is not done or too much liquid has evaporated, add another half-cup of broth and cook for another 5 minutes. If the the rice is cooked to your liking gently fold the broccoli and beans into the rice, remove the pan from the heat, cover it and allow to rest for five minutes prior to serving. Makes about 4 large servings. 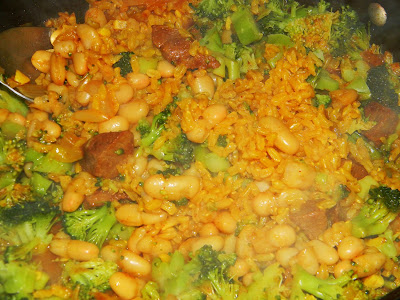