Things That Can be Carried on a Bike (#393)...and how my bikes are therapeutic 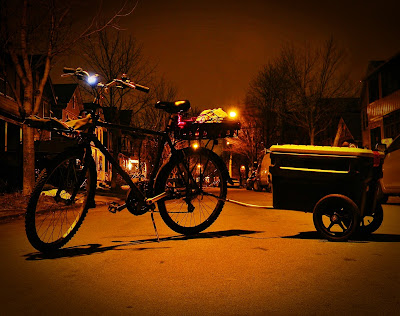 Things on the bike and in the Bike Rev trailer...

$127 (US) of groceries from two separate stores.
3 liters of red wine
4.4lbs. dog food
A gym bag full of wet cloths
A canvas bag containing books and an extra camera
Two portions of Chinese take out

One (of the many) ways my bikes are therapeutic (to me)...

I had a busy day at work, slightly short handed--staff-wise--but just busy (and for some reason the wait staff seemed especially loud and annoying today). Anyhow, by the time I arrived home I was exhausted and had a crazy headache that extended across my entire brow. I rested for a bit and took some aspirin but to no avail. I had planned on going to the health club for a quick steam and swim (which I did) and then do some grocery shopping. I knew I'd be doing a larger shopping trip (for me) and there is still ice on some parts of the roads near the curb (kerb, for my EU friends), and I generally don't ride the Mundo on ice...so I almost drove the truck. But then in a moment of clarity I realized that likely the best thing for me was fresh air...and it was. The minute I got on the bike in the refreshingly chilly air (30F/-1C) it felt good. It was a bit of a struggle--riding my ill-maintained winter bike and pulling a trailer--but it still felt good. My headache was gone by the time I arrived at the health club. When I arrived at the club there were cars circling the parking lot angrily looking for spaces (which there were none), I  in turn was able to coast up nearly to the front door. After leaving the club I rode and did my shopping at 3 separate stores, each time loading items into the trailer and on the bike. And on the short ride home (about 2mi./3.2km.) on this old winter bike with both it and the trailer loaded--and going up a slight incline--I'd be fibbing if I said it was easy and that I wasn't huffing and puffing. Then, on the last stretch of my short journey there is a slight decline in the road and I was able to coast. And as I coasted--with the cold breeze on my face and the sound of my knobby winter tires against the road--there was nowhere I'd rather be. I felt free.