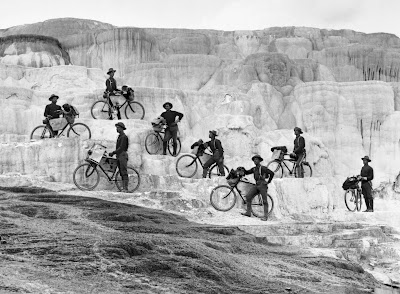 Well first off, the title of this post has nothing to do with soldiers in the city where I was born and live, Buffalo, NY.  It's referring to the Twenty-fifth United States Infantry Regiment, also known as Buffalo Soldiers, which was at the time a racially segregated regiment.

I've posted the above picture before and enjoy it so much that I use it as the background image on my computer at work (click it for a larger view). Sometimes while I'm eating lunch I sit and look at it, and that's just what I was doing today (I love how proud they look). It's an image captured in 1896 by Frank Jay Haynes in Yellowstone Park. That summer they rode those heavy bikes nearly 2000 miles/3218 kilometers, while carrying all their gear and wearing heavy wool clothing...impressive by any means. And I can't imagine the hardships they likely endured...not just physical but also emotional and racial (this was 1896 after all). I was thinking this as I looked at the photo today, and found it so inspiring (and also remembered that it is Black History Month) so I thought I'd re-post the photo with a couple additional photos and a few new words.

Here's some stats (borrowed from The Historical Museum of Fort Missoula. What I find fascinating about these guys--besides their heavy clothing and gear--is that the bikes themselves were likely heavy and they were fixed gear. And most incredible, I think, is that the roads were not paved.

The last time I posted the top picture, a follower of this blog, alerted me to a book he had written about these soldiers titled, Rescue at Pine Ridge. To read more about their fascinating history click here or here.

Lastly, I leave you with the song bearing the same name as these soldiers, by Bob Marley.

The novel was taken from my mini-series movie with the same title, “RaPR” to keep the story alive. The movie so far has the interest of, Mr. Bill Duke, Hill Harper, Glynn Turman, James Whitmore Jr., Reginald T. Dorsey and a host of other major actors in which we are in talks with, in starring in this epic American story.

When you get a chance, also please visit our Alpha Wolf Production website at; http://www.alphawolfprods.com and see our other productions, like Stagecoach Mary, the first Black Woman to deliver mail for the US Postal System in Montana, in the 1890's, “spread the word”.