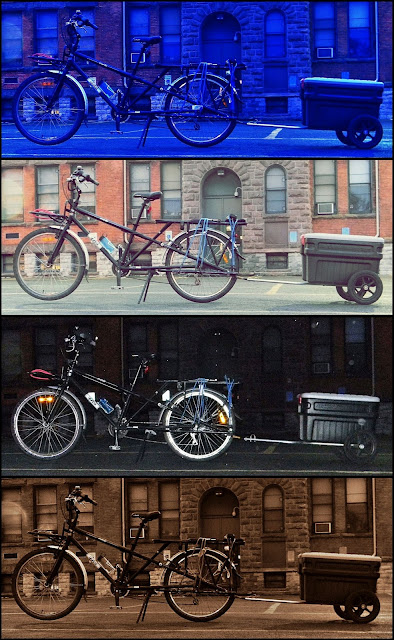 If you've been to this blog before you know that I ride a bike as often as I can, not great distances or in races but for my everyday transportation around town...and I also like to carry stuff on my bikes, whatever stuff a person would normally carry in their car. Besides my cargo bike (Yuba Mundo) I also have a few other bikes, most of which are equipped with a hitch for a BicycleR Evolution Trailer. The Mundo's frame isn't built to accommodate a trailer and I've been trying to figure out how to attach it for a while. Sometimes, I suppose, a 7ft bike is simply not big enough (most cargo bikers will agree, I'm sure) and that one can always carry more things with their own human power. Anyhow, I finally figured out to attach a spare hitch (and it was actually pretty simple). I took it for a test ride tonight while empty...and as usual the Mundo handled exceptionally well; I really could not even tell I was pulling a trailer. I likely won't use it often but it is nice to know it's available when I need it. And when I do...I'll post pictures. I'd enjoy hearing from other cargo bikers regarding their experiences pulling a trailer.

Dr. C said…
I've never towed a trailer with my Mundo, but I have carried a trailer on it before. I got one second hand for my girlfriend's mother to use for her alotment. The size of it meant it would be difficult to get to her (some 30 km away) on the train, so I loaded it onto the Mundo and rode it there.
February 25, 2012 at 7:18 AM