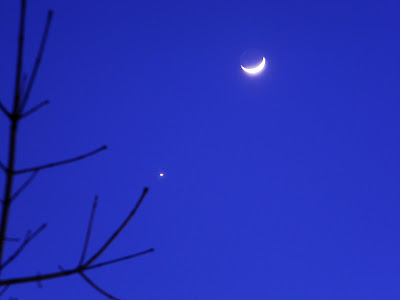 Well this is interesting. The above photo is a zoomed in version of one I posted yesterday (scroll down one post). It was one of a few photos I took at dusk, and in the post I referred to it as the moon with a star visible. A reader of this blog commented that it wasn't a star but the planet Venus (thanks Lauren!)...she also sent me this interesting link. The below photo I took this evening, and if I am reading it correctly, it is the Moon, Venus, and Jupiter...pretty cool.  The top photo was taken at dusk whereas the bottom one at night, hence the different locations of the planets. It's also interesting in that when I took the bottom photo tonight I snapped a half-dozen or so over the course of ten minutes. And while I took the photos I kept the camera stationary and in the exact same position...I just changed the light settings. And after uploading them and looking at the photos in succession I can see the planets move just within the ten minute time span...it's easy to forget (or difficult to imagine) that the rock we stand on as I type these words is spinning and hurtling through space. Anyhow, if you want to learn more about these planets, their alignment, and their visibility, here's a couple links with pictures, diagrams, and text (here and here). You can also see a few additional photos that Lauren took and posted on her blog, It's Knot You. Lastly, here's some brief text from the articles that are linked.

"This arrangement will be visible all around the world, from city and countryside alike," Phillips explained in a NASA announcement. "The moon, Venus and Jupiter are the brightest objects in the night sky; together they can shine through urban lights, fog, and even some clouds." (source) 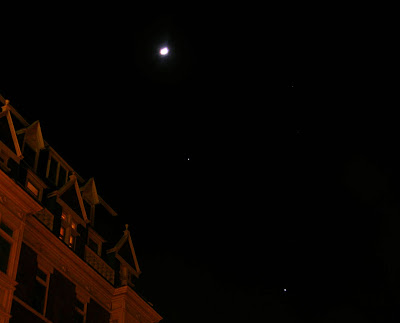