More on the Trailer 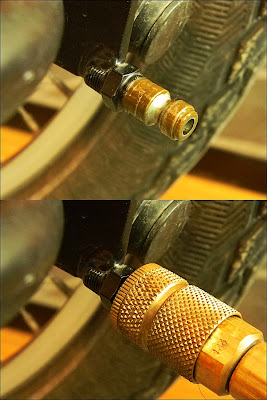 This post is related to my prevous post regarding my latest experiment in self-propelled mobility...a trailer attached to the Mundo. A few people have asked me how I attached the hitch to the bike seeing the Mundo--with its long wheel base--is not suited for an attachment to the traditional axle attachment. How I attached this (to the frame instead of the axle)  would work--I think--for other trailers and other bikes. Anyhow, here it is.

Firstly, above shows how the trailer attaches to the hitch; the top is detached and the one just below it shows it attached. What's unique about this trailer is that it has a quick release using a version of a high pressure hose connector. That said, these trailers are not intended to carry incredible weight like some others. Nonetheless, it has suited me well, and I have in fact owned it long before I owned a longtail cargo bike. These trailers are great for doing your daily errands and hauling a week's worth of groceries while keeping everything dry.

Pictured below is how I attached it to the frame using an existing bolt. On the Mundo there are two bolts on each side of the frame holding the rear drop-down bars in place (pictured in the first of the photos below). I've eyed these bolts for months while holding the hitch up to them in various positions trying to figure out how it would work. BicycleR Evolution trailers  offer two hitch options; I have c-hitches on two other bikes, but on the Mundo I used the standard hitch. Anyhow, the hitch is meant to attach to the axle but also has two smaller holes, one of which fit perfectly in place of one of the bolts on the frame of the Mundo. After tightening it, it felt snug but I didn't feel comfortable with it being held with just the single bolt (which is much smaller than the intended axle rod attachment) so I also used a hose clamp for added security.

Anyhow, there you have it. I likely won't use it often on this bike, nor will I carry super heavy loads in it (as the Mundo was built for that); though I have carried a full case of wine in it on another bike. My plan is to use it for extra large grocery trips, gardening trips, or for when I want to keep things dry. As mentioned in the previous post, the Mundo rode great while pulling it. but today it's snowing out so I'll use another bike. Stay tuned for pictures and updates of the Mundo-trailer in use...

Dr. C said…
The sidebar attachment has changed quite a bit between the V2 and V3 Yuba, I don't think that solution would work with my V2. Good to see that they're always looking at minor improvements with each version though (such as the redesign around the bottom bracket/rear triangle on the V4 to facilitate electric assist.
February 26, 2012 at 2:42 PM

the_big_smile said…
Congratulations, Joe for the hitch! It really is a problem with the Mundos from V3 on to install a hitch.
That's why I bought a V1!