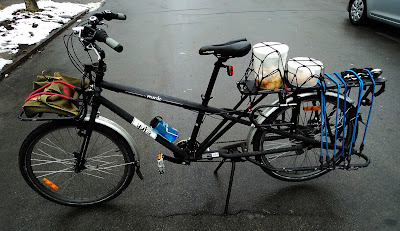 Rear Carrier: Two plastic buckets; one containing a whole-grain pre-ferment (biga), and the other an autolyse, which later became the bread pictured below (click here to see how to make it). 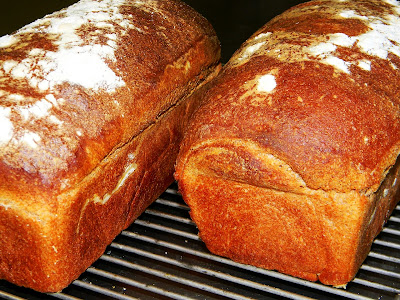 Combine the grain and water in a medium pot and bring to a boil; lower the heat to simmer and cook the rice for about 45 minutes or until very soft. As the grain cooks add more water to the pot as necessary because the cooking liquid, which is full of nutrients, will become part of the recipe. After the grains are cooked allow them to cool in the liquid to room temperature, refrigerating if necessary. Then drain it, squeezing it with your hands or the back of a spoon, reserving the cooking liquid.
Place two bowls side-by-side; one will hold the pre-ferment, the other autolyse. In one bowl combine the cooked and drained 7-grains with 2/3 cup (5.3 oz/157ml) of the cooking liquid, 2 cups (11oz/312g) whole wheat flour, and 2 teaspoons (.2oz/5.6g) instant yeast. Stir just until combined then cover it with plastic wrap. In the other bowl combine 4 cups (21oz/595.3g) whole wheat flour, 2 tablespoons (.5oz/14g) vital wheat gluten, and 1 1/3 cups (10.5fl oz/315ml) cooking liquid; stir just until combined then cover it with plastic wrap (take care not to get yeast into this bowl). Allow the bowls to rest at room temperature for about an hour, during which time the preferment will begin it's job multiplying yeast and fermenting flour, and the autolyse will soak liquid, swelling the gluten.
After an hour or so, combine the ingredients from both bowls into the bowl of an upright mixer fitted with a dough hook. Add the honey, olive oil, salt, and 3 teaspoons (.3oz/8.5g) of yeast (add the yeast and salt on opposite sides of the bowl). Knead the dough on medium speed for about 8 minutes. Place the dough in a lightly oiled container, cover it loosely, and allow to ferment for 1-2 hours, or until doubled in bulk. Deflate the dough and allow it to ferment an additional 30 minutes. Turn the dough out onto a floured work surface and cut it into 2 pieces. Shape into loaves and place into lightly oiled pans. Loosely cover the loaves with plastic wrap and allow to ferment for 30-60 minutes, or until double in size and when gently touched with a fingertip an indentation remains. Preheat an oven to 450f (232.2C). Bake the breads for about 30-40 minutes, adding steam to the oven a few times (either with ice cubes or a spray bottle) and rotating the breads every ten minutes. The breads are done when they are dark brown and sound hollow when tapped upon. Remove the breads from their pans and allow them to cook on a wire rack for at least 10 minutes before slicing.

To see how to make an Ezekiel Bread Recipe version of this, click here.

DanT said…
Hi Hoe,
Congratulations on your #400 "carry" post. I couldn't let it go by without commenting.
I read all of your entries, as I am sure many others do as well, and I enjoy them. They are a necessary part of my day - I just wanted you to know.
Regards from St. Catharines,
DanT
February 19, 2012 at 11:51 PM