Things That Can be Carried on a Bike (#398)...and a few comments on my city-boy quadrathlon 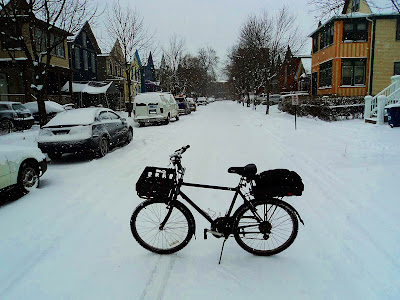 A few comments...The photos are in chronological order of my ride today and the day itself.

Last night the temperature plummeted to sub-freezing and we've also gotten a significant amount of snow...only the second time this winter. This is usually the norm for this part of the world for most of the winter, but because it has been so mild I really felt unprepared for both the snow and the cold. But I felt like riding--and was determined to--rather than take the truck, so I did...and what a ride it was. And I'd be fibbing if I said it was an easy ride, thus I've dubbed it my city-boy quadrathlon...it went something like this.

When I left in early afternoon it was still snowing big fluffy flakes (visible in the above photo)...and geeze was it cold, so I bundled up. The streets were not plowed or salted yet so there was a lot of loose snow on them, and one of the things I do for better traction is to let a little air out of the tires. I did have really good traction, but the combination of riding an old bike in the snow with low tire pressure and wearing a heavy Carhartt jacked while pedaling into a strong headwind really gave me a workout...I was sweating and huffing and puffing by the time I arrived at my destination. Ironically, my destination was a health club...having completed this first leg of the quadrathlon I was already tired. After sitting in the steam room for a bit I swam 3/4 of a mile then returned for more steam. On the ride home I stopped for some groceries (seen below) and the wind was at my back so it made riding easier. But the temperature had dropped so much that the inside of my glasses actually became iced so I had to take them off (I sometimes wear simple safety glasses to keep the snow out of my eyes). Having completed the first three sections of my quadrathlon (bike-swim-bike)--and after putting the groceries away--I'm embarking on the most arduous portion yet...drinking wine while warming next to the wood stove and typing these words...(smile).

It felt good today to be out in the elements--to feel the cold and snow against my face--and to feel my body get winded as I pedaled into the wind. It makes me feel alive. And that, I believe, is the main reason I ride a bike whenever I can. 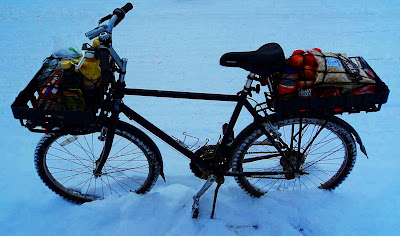 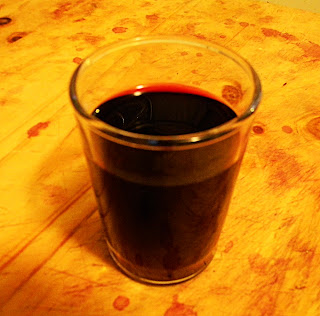 You are a hearty soul indeed. A short ramble with the dog convinced me that an indoor triathalon would be more appropriate for me. I made soup, chipotle ketchup and some bacon jam. A little inclement weather is a good excuse to relax indoors sometimes.

Stay warm. I think the temps are going back up this week here in Toronto.