By now you, the reader or visitor to this blog, know that I am a proponent of bicycles as a utility machine, not just a weekend toy but a serious piece of equipment that can carry you and all your stuff where it needs to go. I believe that bikes are utilitarian, and in the past have posted not just them carrying your everyday stuff, but also about fire fighters, soldiers, mail carriers, police, all sorts of delivery vehicles, and even a pedal-powered camper (caravan to my EU friends). Well this may be the most important...the bicycle as an ambulance. The above photo is from WWI and looks to be two tandems carrying a gurney in the middle. The below three are more modern. Just below is a London ambulance bike, which enables care-givers to get to those in need in traffic-clogged areas. And the two below are images from Africa, using a trailer as a human powered ambulance.

A few years ago I was on holiday in NYC and was walking through Times Square at night. Traffic was at gridlock and there was an ambulance in the middle of it with its sirens blaring and lights swirling. Drivers seemed to be doing their best at letting it through but there was nowhere for them to pull over. I can remember peering, from the sidewalk (pavements), into the ambulance and seeing a lot of movement...all I could do was say a silent prayer for the people inside, for both the patient and the workers.

I'm an optimist (finally) but also a realist. If I were in a life threatening situation and a traditional ambulance could reach me would I choose a bicycle version instead...of course not. But if a team of health care workers could pull me ten blocks to a hospital by bicycle instead of being stuck in traffic, or a person on a bike could bring me the proper medical care...hell yes, I'd welcome a bike. The bike ambulances in Africa (bottom two photos) really seem the most practical. If I had to make a choice between being carried or struggling to walk to a clinic or ambulance in a rural setting I would without doubt choose a bike trailer. And the most moving part (moving as in emotional, not motion), I think, is the thought of the bicyclist pulling a person on one of those bike ambulances...talk about precious cargo.

To read more about the London Bicycle Ambulances, click here.

To read more about the African Bicycle Ambulances, click here or here. 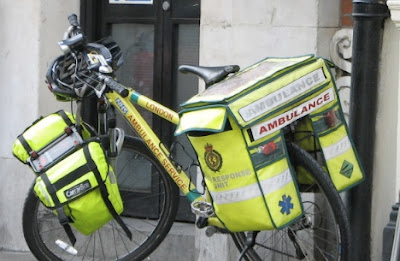 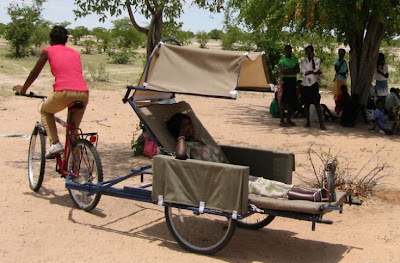 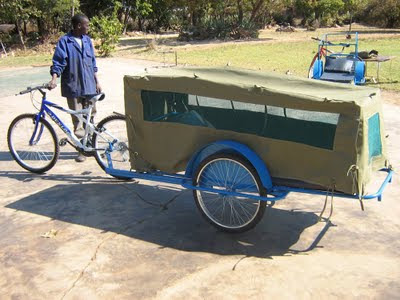