A Couple Bikes and a One-Man-Band 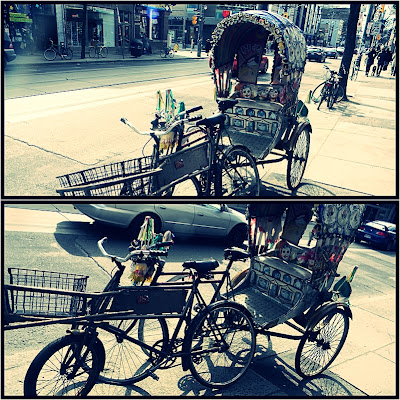 I took a day trip with my son to the vibrant city of Toronto. It's a mere 100 miles / 160 kilometers from my home and a very simple drive (granting you don't get stuck in rush hour traffic). And every time I go there I realize getting there once or twice a year is not nearly enough. I was window-shopping for another bike (yikes...more on that in a later post) and stopped at three of my favorite Toronto bike shops...Curbside Cycle, Sweet Pete's, and The Urbane Cyclist. Anyhow, here's a couple photos of bikes and a bicyclist I saw today. The top is a photo of an old delivery bike leaning against an ornate rickshaw-style trike on Queen West. And the series below are of a guy we saw in the Kensington Market (actually we heard him before we saw him). He has a small amp hanging from his handlebars and a microphone strapped to his face. There's also a small bongo somewhere, a series of harmonicas, and 3 or 4 tambourines.  In the first of the three pictures you can see that he saw me take his photo. He started to slowly pedal toward me as he sang and clanged away. I thought for sure he was going to ask for money. He didn't. He simply wanted to play his music and get his photo taken. I shook his hand (while he continued to sing and play) and he slowly pedaled away. It's things like this that really make my day...people quite literally living outside the box that society tells us exists (but I think it only exists if we allow it). 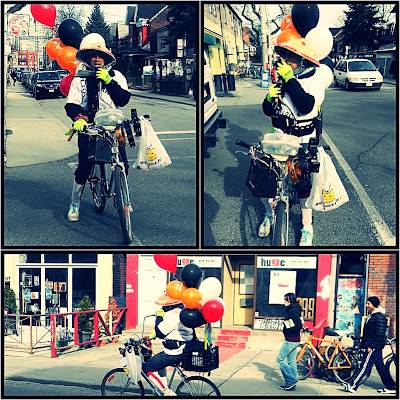 Thanks for your post on Toronto. I always love it when other people recognize what I think makes this city a great place to live.

Glad you had a good time. Next time you are here I hope you get to see the guy that rides his bicycle backwards! He is very good.

BTW, besides my own LBS you mentioned three of my favourite bike shops in T.O.