The Goodness of Beer 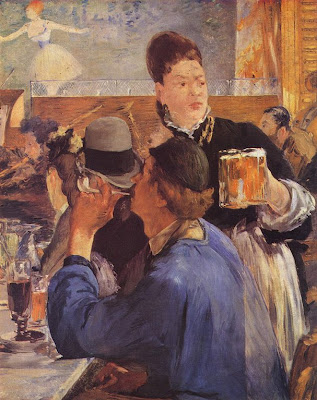 The above image is The Waitress by Edouard Manet


A little over a week ago I posted this recipe for Potato Bread with Beer...and also stated that it was not made with 100% whole wheat flour. Which is fine...it's still a very good recipe, but these days I prefer whole wheat. Anyhow I thought I'd re-post it with the below version that is all whole wheat, along with a soup recipe which contains beer as an ingredient. For more recipes that include beer as an ingredient, and if you'd like to read an article I wrote on the subject--including history and personal stories--click here.
Whole-Wheat Potato Bread with Beer and Cheddar
Makes two loaves
2 cups cooked and mashed potatoes, room temperature
1 cup whole wheat flour
1/2 cup beer, room temperature
2 teaspoons instant yeast
_______________________

Combine the contents of bowls in the bowl of an upright mixer that is fitted with a dough hook. Also add the eggs, honey, olive oil, 3 teaspoons of yeast, and two teaspoons of kosher salt (try not to let the yeast and salt come into direct contact). Run the mixer first on low speed, until it gathers the ingredients together, then on medium speed; knead the dough for about 6 minutes. Add the cheese and knead the dough for another 1 or 2 minutes. Transfer the dough to a lightly oiled bowl or rising bucket, cover it and allow the dough to ferment for 60 – 90 minutes. Then gently press the dough down and allow it to ferment another 30 minutes.

Divide the dough into two pieces, shape it into loaves, and place it in lightly oiled loaf pans. Preheat an oven to 425F and allow the dough to ferment and rise for about 45 – 60 minutes. Bake the dough for about 30 minutes. When it is initially placed in the oven spritz the oven with a little water, lacking a sprayer toss a few ice cubes on the oven floor to create steam. Rotate the loaves after 15 minutes and spray the oven again. The bread is done when it is golden brown and sounds hollow when tapped with a finger. Remove it from the oven and their pans and transfer it to a wire cooling rack or clean towel which has been folded to double thickness. Allow the bread to cool 15 minutes before slicing.

Potato Bisque with Beer, Bacon, and Cheddar
Makes about 6 cups

Heat the butter in a small soup pot over medium high heat. Add the bacon and cook it until it begins to brown. Add the onion and carrot and sauté for 5 minutes. Add the beer, 2 cups of the chicken broth, the diced potatoes, salt and pepper. Bring the soup to a boil, then lower it to a simmer. Simmer the soup for about 30 minutes, or until the potatoes are very soft. Then add the cream. Purée the soup in a food processor. If the soup is too thick add the remaining stock to thin it. Transfer the soup back to the soup pot over moderate heat. Stir in the cheese. Check for seasoning. Serve hot or cold.