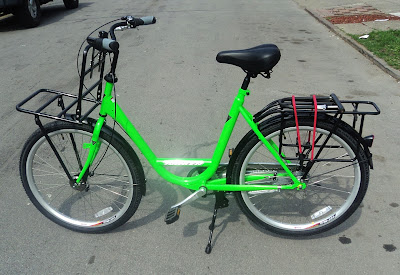 Yep...loving this bike so far but not the color (more on why I purchased this color below). I've been in the market for a somewhat inexpensive bike to replace my winter bike (aka...the Mule; aka...my home built cargo bike). This is not to replace the Mundo (which is still my favorite bike); it's just that some days--many days--I don't need 7ft of bike to ride to-and-from work, the health club, or the store for a few items...but I still want a bike to carry stuff. I've looked at the above bike many times (on the website, not in person) and have also thought of the Africa Bike 3 (that's one of the reasons for my visit to Toronto last week). What I would really like, but is way out of my price range, is a Batavus Personal Delivery Bike, but the Torker Cargo-T--pictured above--is actually based on the Batavus Bike (albeit an economy version). So here is the reason for the bright green color (it is so very green, isn't it?)...after checking the Torker website recently I found they no longer had the Cargo-T listed, turns out they stopped making this particular model...but they still had a few of last year's models in the warehouse. So after contacting Torker, and then my local bike shop, I was able to get a deal on one of last year's bikes at nearly $150 discount...but this was the only color they had left (not a surprise...it's only two colors available were this neon green and grey). But seeing how I like all my bikes black--either purchased that way or painted by me--the next time you'll see a post of this bike it will likely be black...two cans of matte black paint were the first things I carried home today. Anyhow, as I had to work a double shift today I only had a chance to test ride it for a few miles but I really liked it. And I find it interesting in that in all of the positive reviews I've read (haven't found any negative) a lot of people describe this bike as like riding like a tank or comment on how heavy it is. It is heavy (steel frame), but after riding a Mundo for the past few years this bike seems sort of...well, small. Will this bike replace my Yuba Mundo...not a chance. But do I like it...most definitely yes. I'll post more on my views of it after I ride it more, but in the meantime if you are interested in reading a well-written review of this bike click here (it's a review of the 2009 version; they didn't make a 2010 that I know of). 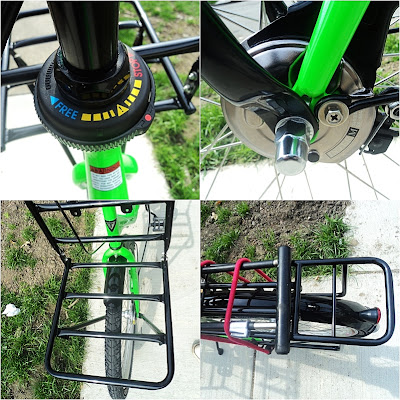 DanT said…
Joe,
That is a very nice bike but you will still have to use your ramp to bring it into your house.
I've been enjoying my Yuba this Spring / Summer too. Hasn't the weather been amazing?

Joe said…
Hi Dan...yes I will/do have to bring it in the house. It may be shorter than the Mundo but not much lighter. And yes these past few weeks have been amazing, I just hope it doesn't mean it's going to be super hot and humid all summer.
March 24, 2012 at 5:52 PM