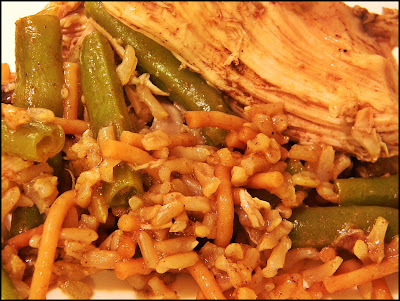 Yes I've posted this recipe before--or many variations of it--but it's one of my favorites and I can't help but post it again in hopes that more people try it. This is yet another variation of the classic Lebanese Chicken-and-Rice recipe that I grew up with. While this version still has toasted vermicelli, I used whole wheat pasta, and rather than white rice I used brown, which increases its cooking time by about 25 minutes. Also, the recipe usually contains ground beef or lamb as well; this I omitted entirely, not that I don't enjoy it, I'm simply making a conscious effort to reduce my red meat consumption (but not give it up entirely). I also added some sliced green beans to the dish for color, flavor, and added texture. Anyhow, if you've never made this recipe or tasted it you are in for a real treat when you do. It is without doubt one of my favorites and the aroma as it cooks will make your mouth water.

This dish, by the way, goes great with a salad dressed with this mint-garlic vinaigrette. If you'd like more information and additional pictures of this dish--or variations of it--click here, here, or here.

On a somewhat different note, I've mentioned in the past that two pugs own me (yes, I'm aware of that wording). Tonight while I preparing the above meal they were acting extra excited, pacing back and forth. I was off to a late start as it was and was occupied with preparing my dinner. I thought maybe the aroma of chicken cooking was making them a little crazy. Then I remembered...I was so occupied (and late) with cooking my dinner I had completely forgotten to feed them their dinner. You can see the look of concern in their eyes in the bottom photo of this post. If they could speak they'd likely have a few choice words for me. And yes, I felt so bad I gave them each a bit of chicken :)

Anyhow, here's the recipe and how to prepare it in pictures and words; for other versions click the above links. 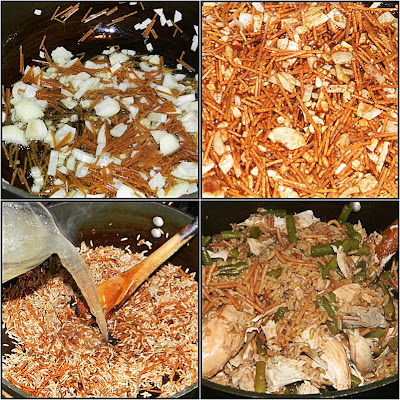 Heat the olive oil over high heat in a heavy-bottomed pan. Sauté the chicken on both sides until golden brown. Remove the chicken from the pan and set aside. Add the onion and vermicelli to the pan and cook until golden, then add the garlic and cook another minute or two. Add the cinnamon, cumin, allspice, and salt; sauté two minutes while stirring. Add the onions and pasta back to the pan along with the rice, stirring to fully coat it with with the oil and spices. Then add the chicken breasts to the pan, pushing them gently into the rice. Pour in the broth and cover the pot with a lid. Reduce the heat to a simmer and cook for 30-40 minutes, or until the rice is cooked. Remove the pot from the stove and allow to rest for 5 minutes. Sprinkle with minced parsley. 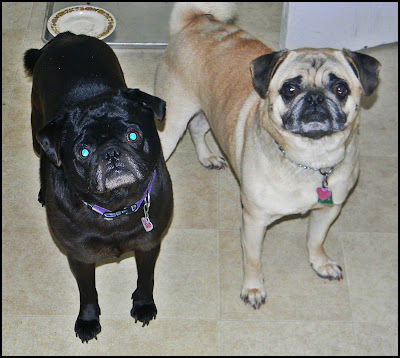