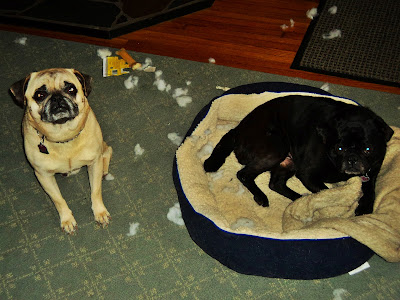 That's Maxwell on the left and Franklin on the right; they are brothers from the same parents but separate litters (Max is a year older). I've posted on them before and thought I'd share today's brief story. That's their new bed Franklin is lying in. I posted a picture of them both in it here and a picture of me recently bringing it home on my bike here. They are really good dogs. They spend a good portion of their time home alone while I work or do other things (that's why I got two, to keep them company...pugs are known to get lonely). They are 99.9% house trained and rarely have an "accident" and they rarely do damage around the house (such as chew things other than their toys). But every once in a while they do a bit of wilding while I'm at work; today was on such day. Apparently they needed to make their new bed a bit more comfortable by removing some of it's stuffing...that's it strewn about the picture (and throughout much of the house). The yellow scrap of cardboard behind Max and next to his bone is what remains of the box of a bicycle inner-tube I had on a table near my bikes; the tube itself is out of view but stretched out straight in the dining room as if they were having a tug-of-war and just set it down when they became tired (how, I wonder, did they get it off the table). Anyhow, the look on their faces when I walked in is what cracked me up. I know I should have been mad, but I had a stressful day at work today and when I came in and saw them all I could do was laugh. Both of them looking at me like, "he did it." You may or may not know, but pugs are an old breed of dog with a rich history. They are known pranksters (sometimes referred to as big dogs trapped in small dog's bodies) and one of the reasons they were first breed was to entertain the emperor of China. Well they sure do their job with here..they entertain the emperor of this house. Currently they are both sprawled next to the wood stove sound asleep...likely tired from their exciting day.