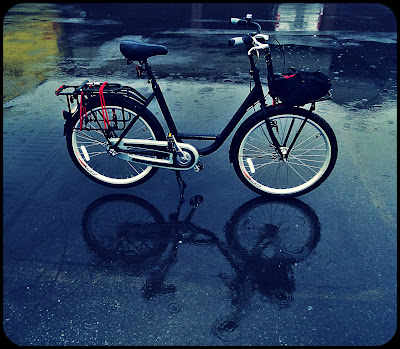 Well, first of all, while I'm not entirely car-free yet, I don't specifically have one to drive. What I mean by this is that my truck is officially off the road (no longer legal as the inspection has not been renewed) and is sitting in the driveway of my son's mom's house, but I still own it. It's also officially for sale. If you want to see it or it's description, here's the sale page.

Interestingly, while I was getting information together in order to sell it I noticed that since I purchased it about 3 years ago I only drove it about 8000 miles (2666 miles a year)...according to the US Department of Transportation at this page, the "average male" in my age group drives about 18,858 miles a year...I've never been one to be average.

But with that said...

Today, being Monday, is one of the two days a week I would move the truck from one side of the street to the other lest I receive a parking ticket. And today it was also raining...hard. I wanted to go to the health club--which I did--but I have to be honest in that if the truck was there and I had to get in it anyhow I likely would have driven to the health club. But it wasn't there. And I still went. And I didn't melt.

This is just a test.

Anonymous said…
You can do it,my friend...I might not could (see the "Diabled" part of DC,sometimes I just can't ride due to it,and public transit...here? Ugh...LOL! :p),but you can,I gots faith :)