Two Loaves of Ezekiel Bread, a Pizza, and Why it Took Nearly 48 Hours to Make them 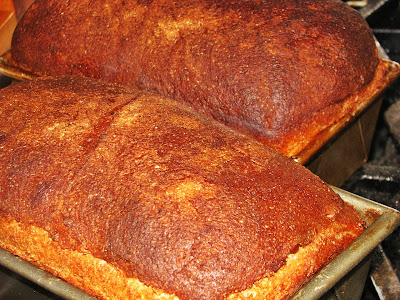 Firstly, this post is not about how to make Ezekiel Bread, per se, but more about how to incorporate bread making into the rhythm of your daily life rather than upsetting it. I have always thought, and still do, that the bread mostly makes itself, we simply provide the correct conditions and guide it along. And while this can be applied to any of the bread recipes on this blog it just happens that I was making Ezekiel bread. There is a recipe for Ezekiel bread below, but if you'd like more detailed instructions with additional photos--and to read about my views on this bread--click here and here.

Anyhow, the reason it took me 48 hours to make this bread is not that it is any more difficult to make than other breads, it's just that, well...sometimes life gets in the way of your plans. Here's a quick story and an example of what I mean.

Two evenings ago I thought I'd start a batch of this bread and let it ferment overnight, so I boiled the grains and beans in the evening. After they were boiled I shut them off on the stove to let them cool and forgot about them. Literally. So I just put a plate over the pot and went to bed for the evening. I had to work yesterday evening but thought I'd make the bread prior to going to work so I started the preferment and autolysis first thing in the morning. Well, you guessed it, time slipped away from me and I never even mixed the dough let alone baked the bread. So I covered the bowls of preferment and autolysis and placed them both in the refrigerator, and then went to work. This morning when I initially woke, I took the bowls out of the fridge to let them come to room temp for about an hour or so. Then--finally--I combined the two bowls and mixed the dough. After placing the dough in a rising bucket I returned it to the fridge and went to church. When I came home the dough had risen so I pushed it down and replaced it into the fridge while I did some yard work. Later, I removed the dough from the fridge, cut it into three pieces--two for bread and one for pizza--and panned all of them up. After allowing them to warm a bit again, I returned them to the fridge while I did some errands and stopped at the grocery store. When I returned, I removed the doughs from the fridge for the last time and preheated the oven while I made the pizza. By the time I put together the pizza the oven and pizza stone was hot enough so I baked the pizza. After removing it, and allowing it to cool for about 5 minutes, I baked the bread while I ate the pizza. All-in-all, it was about 48 hours from boiling the beans until the bread came out of the oven and--while the above text may make it sound complex--it barely disrupted my life. One can postpone the dough from rising and fermenting it by refrigerating it, thus controlling how it progresses.

This recipe in general is delicious, but because of the long slow fermentation it tastes especially full-flavored. And yes the pizza was/is delicious as well. Now if you'll excuse me I think I'll go grab another slice. 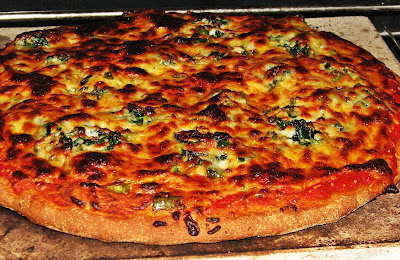 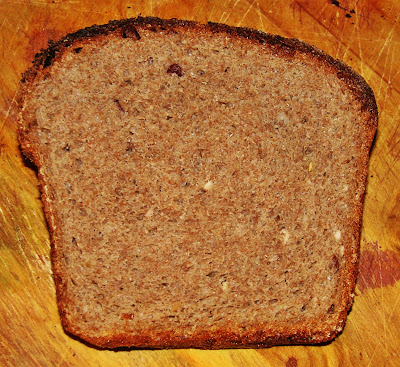 Myka said…
My grandmother always has homemade bread in the house, it's something that I think I might like to aspire to as well.
April 29, 2012 at 10:11 PM