The Perpetual Motion of Life, a Favorite Gandhi quote, and a Who Song 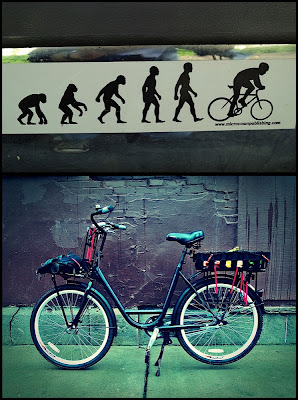 I've mentioned a few times on the origins of this blog, but in the event I've yet to bore you with it I'll state it again because sometimes I veer off course. A little over four years ago I started this blog as a sort of public diary on my efforts to simplify my life (read the first post here). And while I've always been an avid cyclist one of the ways in which I planned to simplify was to bike even more (and drive less). I have, I believe, been successful. One of the original names of this blog, in fact, was going to be, My Two Mile Island, and that I would ride a bike within a two mile radius of my house instead of driving, no matter the weather. This has bee mostly successful also. I mention this because I've been reflecting lately--on this blog, but mostly my life--and some of the twists and turns it has taken. And I mention all this because I've been thinking of my motives for going car-lite and now car-free (yes...ta da...I finally did it...sold the truck yesterday). And sometimes I really question myself...am I a bit nuts (well, yes, but I mean really). Here I am 50-years-old with creaky knees and a sometimes aching back--and I can afford a car--but I choose to voluntarily give up car ownership. Why, I wonder, am I doing this...I mean really...why? So I mentally listed some of the reasons, and here they are in no particular order.

Going "green," or doing it for the environment. I list this first because this is what most people think when I tell them I am car-lite or car-free ("oh, that's so great...your going green, I wish I could do that")....but, believe-it-or-not, it is actually low on my personal list of reasons. Yes, of course I want to do good things for the planet (I really do believe we are destroying it, not just with cars but in so many ways), but that's not the only reason I choose not to own a car...it's not even the main reason. Like any good American the main reasons that I choose to be car-free are for selfish reasons. Money is a big one. I am tired of the insurance payments, high gas prices, and never-ending upkeep and repairs of a car. Health is also a reason--but not the main reason--I like the fact that I burn calories and not gas when I walk or bike. But here is the real and main reason--the top of the list--on why I choose to go car-free. Drum roll please....because I like to walk and ride bikes more than I like driving a car. It makes me feel free.

For much of my adult life I've felt this way. When I was a teenager living in the suburbs I would sometimes leave my car parked in the driveway to save money and hitchhike the 5 miles to work (money for beer and marijuana was way more important at the time). This of course was when hitchhiking was viewed as semi-safe and people would actually pull over to give a stranger a ride. I remember how free I felt walking down the road with my thumb out thinking I was some sort of character out of a Jack Kerouac novel.

And when I became a bit older and moved back to the city I again was car-free. For the first 5 or 6 years my future (now ex) wife and I were together we we car free. I would bike, take a bus, or walk to work. Walking was, and sometimes still is, my favorite form of personal transport. Sometimes when I walk and am in deep thought I'll arrive at my destination and not remember much of the walk...sort of like I meditated my way there.

Will I stay car-free permanently? I don't know. I hope so, but I can't be sure. We had a really mild winter this past year, but I have to admit it is a lot easier dealing with the extreme winters on foot when you're in your twenties rather than your fifties. But still I plan on giving it a try.

The top of the two photos is an image of a bumper sticker I put on my truck a couple years ago. It is actually what caught my eye as the truck pulled away; the last thing I saw of the truck. Interesting, I think. A sort of mock evolution...an ape to a bicyclist. But I really think it's a good metaphor for life in general (mine and yours)...life is in constant motion and evolution. I am certainly not the same person I was 5 or 10 years ago, or even just a couple years ago. It would be impossible; I'm in a different stage of life than I was a decade ago. Things change and so do we.

So for now I plan on giving this a try, who knows what the future holds. And this is what I was thinking about as I was riding to work this morning with the cool but damp spring air on my face and in my ever-thinning hair. I felt free, and a song by a similar title--one of my favorite Who songs--kept ringing in my ears, especially the opening line...."I'm free, and freedom tastes of reality."

Anonymous said…
You're very much like me in the reasoning of why you do it...for me,being green or fitter in being car-lite is barely making an "honorable mention" rating...while I can't walk very far at all*, love to ride. Green is a very nice bit of icing for the cake though ;)

*for whatever reasoning of the ever-so-slightly different motions on the muscles/back region,walking "sets off" my spinal issues (injuries) where-as the motion of the pedals on the bike do not...hence,I can ride 10-50 miles (my farthest ride so far is a half century...I will ride further one day),I can walk a block,2 at the most before I'm down and cane hobbling....weird to me this seems...
May 8, 2012 at 7:43 AM