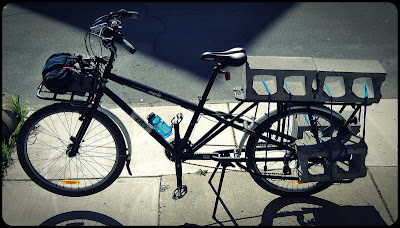 Okay...so this is pushing the limit with what one can carry on a bike. These blocks, the best I can figure, weigh about 38lbs/17.2kgs each (152lbs/68.9kgs total)....it felt like more. I know it is claimed that the bike is able to carry more weight--and it likely has--but I'd be lying if I said this wasn't difficult. I've carried bulkier loads than this but this was a bit nerve wracking to say the least. Often on this bike--because of the way it is built--I can't tell the difference or am not aware of a load because it rides the same. Let me just say that I was fully aware that I was hauling a bike full of cement. Thankfully I only had to carry them about a mile-and-a-half. 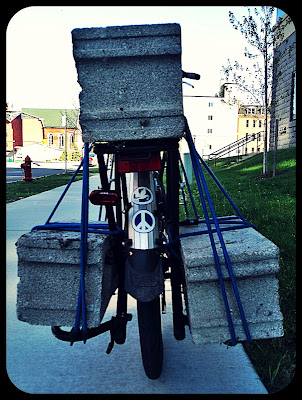 Anonymous said…
It would have more comfortable to carry all the blocks on the side rails. Keep the centre of gravity low!
May 7, 2012 at 2:43 AM

Joe said…
Anonymous...tried it. Wouldn't fit. Would have had to make two trips (which I almost did). It wasn't the center of gravity (balancing was fine)...it was the weight. Thanks for visiting and commenting.
May 7, 2012 at 7:15 AM