Things That Can be Carried on a Bike (#441)...plus a quick glance and a couple comments 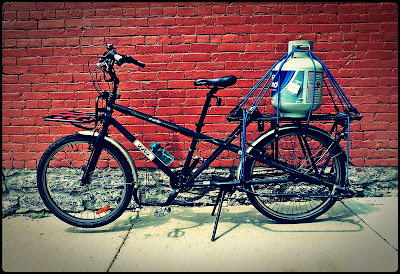 On the bike...A full tank of propane.

Comments...First of all I love the slogan that Yuba often uses, "What a bike can do." And I love the comments and looks that I often get while carrying stuff on a bike (looks that say...I didn't know you could do that). The above image is one I took on my way home from exchanging my empty tank for a full one (it's getting hot out--89F/31C today--time to start using the outside kitchen). As I was pulling into the lot of the store with the empty tank on the back a guy in an SUV slowed, then came to a complete stop to look at the bike and me as I glided up to the front door. At first I thought he was angry by his look, but then his frown--behind the air conditioned glass of his vehicle--turned to a smile then a huge grin. He gave me two "thumbs up" and I could see his lips moving and he said "What the f#*k (I take it he was complimenting me). Then, after paying my bill in the store and meeting the manager outside near the propane cage to exchange the tank, the manager offered to carry the full tank to "my car." Not wanting to explain things to him (sometimes it can get tiresome) I told him I didn't mind carrying it. He then told me that he was supposed to, that it was store policy. Okay, I told him, my bicycle is parked over there. Blank stare. Then I had to explain the bike and said that it was big enough to carry this. As we walked and the bike came into view his eyes got big and he says, "Holy s#*t!" Again, I take this as a compliment.

2wheelsgood said…
I can just envision that thing bouncing along behind if it were not lashed down really well... but it's not the weight of the load though I'd try to carry it lower on my own cargo bike. Probably about like having a kid in a seat back there, and less wiggly too.
May 25, 2012 at 2:37 AM

Anonymous said…
LOL,I love that look and those comments of shock (like you shared,often phrases I no longer use,myself LOL,butI digress... :p) EVERY time I reid the new Xtracycle (can't wait until the Yuba budget grows back!)...I find myself looking for things just to haul :p

Joe said…
Old Fool...Nice to hear from you. Keep pedaling!

2wg...It was actually fine. Trust me I made sure it was secured.

Anne said…
Ha ha! I live in China and you'll need to strap at least 5 more to your bike (two on the either side of front wheel and two on EACH side on the back) to compete with the guys here! We see it on bicycles, scooters and rickshaws. I wouldn't want to be one of the delivery guys!
May 31, 2012 at 10:19 PM