And on the lighter side... 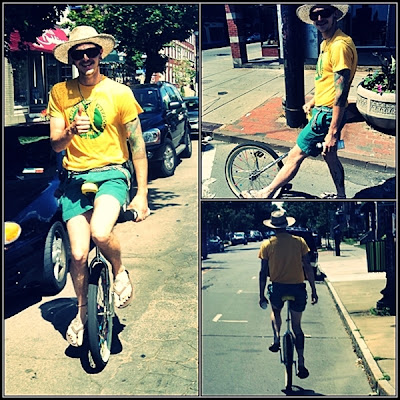 Sometimes I forget, or at least take it for granted. I often--on this blog and elsewhere--voice my views how great bikes are as a means of personal transport and that they are a viable vehicle in today's world, and also that they can carry all sorts of stuff...most everything you need, in fact. I'm on bikes all the time and never forget the freedom they offer...but sometimes I forget how simply fun they are to ride. And in the last couple days I came upon a few people that were riding bikes for the sheer fun of it. On my way home from work this afternoon I turned a corner and just ahead of me was the above fellow, Matt. He was moving at a snail's pace and his legs were pedaling rapidly. It immediately made me smile. I took out my camera as I pedaled and took a few photos, and as I approached him I could see that he was smiling too. At the next traffic light we chatted a bit and he agreed to have his photo taken (thanks Matt!). He also says that he owns a few unicycles and has been car-free for years. Nice! The photo below I took under similar circumstances a couple days ago. I was pedaling home and looked ahead and saw two people pedaling side-by-side but on the same bike, a Buddy Bike. I chatted with them at the next stop light as well but never did catch their names before they happily and slowly pedaled away on a warm summer afternoon. 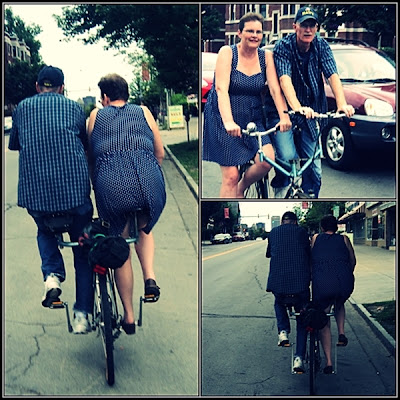