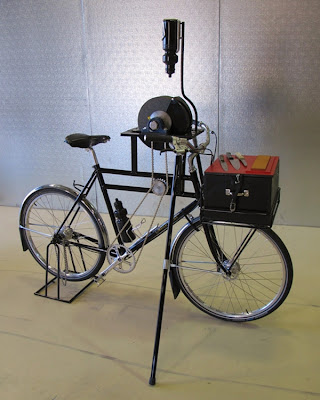 This, I think, is really interesting. A work bicycle of yesterday being built again for today. I originally came across this at Bike Hugger, and apparently it is being built for Nella Cutlery by Winter Bicycles. I'm old enough to remember--when I was a little boy--the vegetable hucksters coming around (by truck not bike) and shouting their arrival with their distinctive call, and the egg man and milkman, too. And later, when I spent a brief period in the French Quarter of New Orleans during the mid-1980's there was still a guy who would come around (again, by truck) and shouting his arrival and cooks and housewives would come out to have their knives sharpened on the back of his truck. Anyhow, I think this is pretty cool. Many of you know that I work as a professional cook, that's all I've ever done. And some days when it gets crazy hot and busy I fantasize about doing something else...working for myself out of doors in the summer instead of facing a blazing stove. Well...Ahh, it's good to have fantasies I suppose. I don't know how easy it would be to support one's self financially grinding knives on a bicycle, nor am I sure how many people would actually use the service. But if you're ever in your house and hear someone yelling in the street...the knife man is here to sharpen your knives, l'uomo coltello è qui, el hombre cuchillo está aquí, l'homme couteau est ici...bring your knives and scissors out to be sharpened...it may just be me. 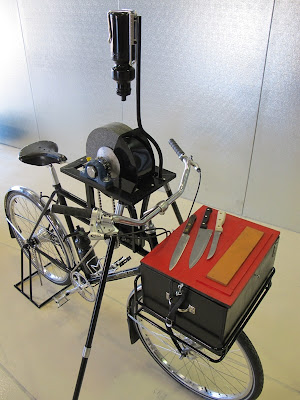