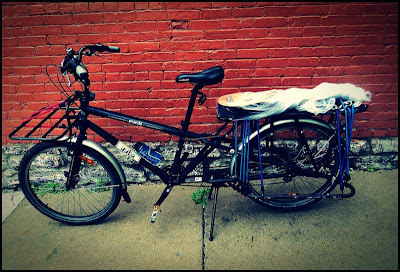 The brief comment...So if you ride a cargo bike or at least a bike that does not necessarily resemble what a bike in America "should look like" you're likely used to getting comments and looks; this was one of my favorites. I was at a traffic light and I see, out of the corner of my eye, a young fixie guy staring at the bike. He was leaning against his bike that likely weighed as much as the guitar I was carrying and wearing his uniform, you know...tight jeans rolled up, bicycle cap, messenger bag, tattooed and pierced. Finally I look over at him and he asks me if I welded two bikes together. No, I told him, it was built this way. I also mentioned that it's made to carry stuff...up to 400lbs. His eyes get wide, and he says, Doood...that is awwsomme! It made my day :)