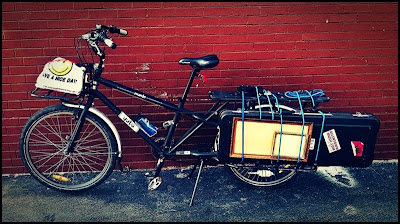 On the bike...a Fender Stratocaster guitar, two antique picture frames (which I rescued), and a double portion of Chinese take out.

A couple quick comments...I've mentioned on numerous occasions the many comments I get while riding or parking this bike (and if you ride a long-tail or other cargo bike you understand this completely). The most common comment is whether I built the bike myself. Today, for example, while I was locking up the bike in front of a Chinese restaurant to pickup the aforementioned food, the bike quite literally stopped a guy in his tracks. He asked me all about it and even pulled out a pad to write down the bike's name and website (I told him I felt like a cargo bike evangelist). A couple minutes later, as I exited the restaurant and was securing the food to the front rack, the owner and cook of the restaurant came out for a smoke. He too asked me about the bike. Then I asked him if he weren't from China (he is) and hasn't he seen more impressive bikes and loads being carried by bike there. He has, he said, then he pointed at the bike and said...but that is pretty impressive. And as I hopped on the bike he called out...have a nice day, Joe. It made me smile. I waved and called back to him that I hope he does the same. 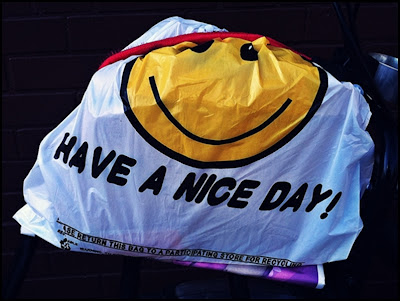