Things That Can be Carried on a Bike (#467)...and a couple quick comments 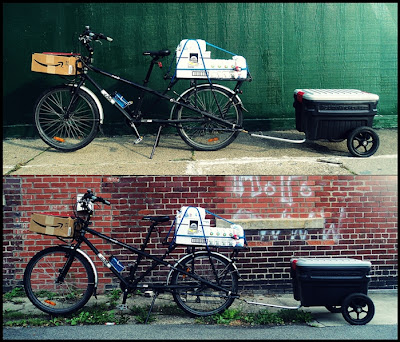 On the bike...A double portion of Chinese take-out, two bottles of red wine, and more than $200 worth of groceries in two cardboard boxes and a BikeRev trailer from three separate stores.

A couple quick comments...the first thing is that tomorrow is the first time in about three months I'll be using a car (via Buffalo Car Share), and that it is possible--even for a middle aged guy--to go car free. Another thing--and this is really more of an observation--is that unless you are on a bike really loaded down with stuff you most likely don't notice slight inclines. This evening, for example, after going to a grocery store that is slightly farther than my usual, I noticed that it was basically uphill the entire way home (I didn't go for a swim today but still got my workout). And lastly, this is a comment from someone else. As I was huffing and puffing uphill with the bike fully loaded and pedaling slowly in 2nd or 3rd gear, I pass a group of kids on the street. They all just watch as I pedal slowly past them. And as I pass, one of them--a young girl of maybe 12 or 13--yells out, "Hey Mister...THAT is a really awesome bike!" That made it all worth it :)