This Year's Garden Issue, and a quick tomato recipe 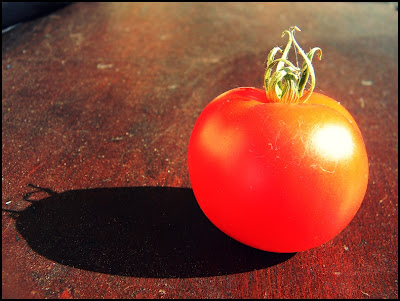 Every year it seems there is a new "issue" in the garden. Such is life, right? I can't imaging how difficult it must be for farmers who rely on their crops for their livelihood, or those who rely on the food they grow to sustain them entirely. A few years ago I had an army of city rabbits who chose to inhabit my tiny gardens each night, then I had giant tomato-eating slugs wreak havoc, and last year there was a hungry city raccoon that all but wiped out my small patch of corn and ate it in a nearby tree (no kidding). Well, this year it is not an animal or insect that is causing trouble, but the plants themselves. The tomatoes in the front of my house, while they look incredibly healthy, are inflicted with--what I've finally been able to identify--the not so technical sounding blossom end rot...and it quite literally does as the name describes, the blossom end, or the end that is not connected to the plant, rots. I'm still getting a few healthy tomatoes from the front, and the rear garden does not seem affected, but it's still early and most of them are still green (the rot begins while they are still green). The tomatoes pictured above and below obviously were not affected, but I've been pulling and discarding at least a half-dozen black rotted tomatoes a day in hopes of slowing and halting the problem. From what I've read this is not an easy problem to overcome, but I'll try (and there are far worse problems to have in this world today). If any gardeners out there in the blogosphere have had this problem and overcame it I would love to here about it. Thanks. Anyhow, on to the recipe. 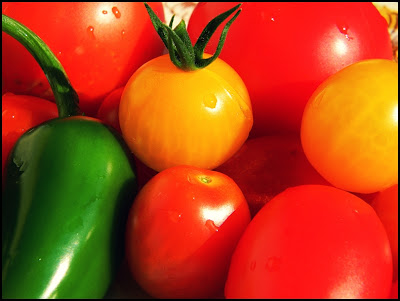 This recipe is about as simple as it gets but is still bursting with nutrients and flavor. It's really just another aglio e olio type recipe, but in this case the ingredients are turned into a sauce. The easy steps are below. 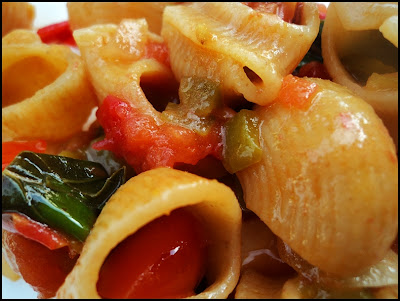 Heat olive oil in a heavy skillet and add onion, peppers, and garlic (I used sweet and hot peppers)...cook them slowly until they begin to brown, forming a sort of sofrito. Add diced tomato. Any type will do, I used two types of red tomatoes plus a couple yellow cherry tomatoes with seeds and skins intact. Cook the tomatoes for a couple minutes to release and evaporate some of their juices. Then add chicken broth (or vegetable broth if you want to keep it vegetarian) and a bit of seas salt. Bring the sauce to a boil then lower it to a simmer; cook the sauce for a few minutes until it reduces and thickens. Meanwhile boil whatever pasta you prefer. When the sauce is to your liking (in consistency and flavor) it can be pureed or left chunky, which is what I did. Add a few chopped basil leaves and then the cooked pasta. Toss or gently stir the pasta into the sauce allowing it to soak up flavors. 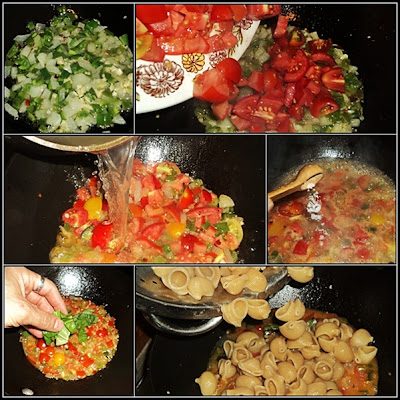 Anonymous said…
I made this with whole wheat pasta and my husband loved it :) I love when he loves my cooking, especially when it's healthy! Thank you for sharing your recipe!
July 26, 2012 at 10:54 PM

Joe George said…
Anonymous...Thanks for taking the time to comment. And I'm glad that the recipe came out well. Having a husband like his wife's cooking...looks like my job is done here :)
July 29, 2012 at 8:41 PM