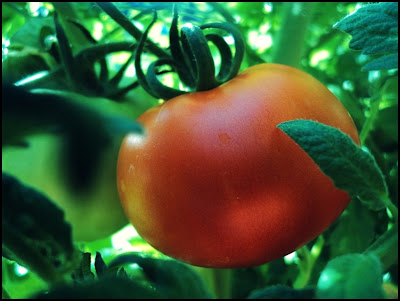 Beautiful isn't it? The first tomato of the season. Within two weeks I'll have a bushel of them. And the season seems especially early this year. Like much of the nation, Western New York State has been sweltering this summer and the garden plants are loving it. We--WNY--have a relatively short growing season, but I anticipate a longer one this year. And the efforts of planting a garden--in the front and rear lawns, or what once were lawns--is paying off...I shouldn't have to purchase vegetables until the fall. 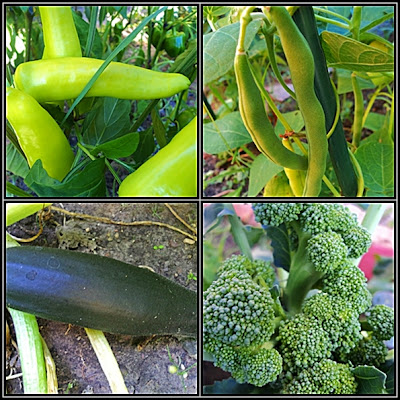 It is such an excellent feeling to walk out my front or rear door with a plate in one hand (and often a glass of wine in the other) and pick food for dinner. The last few nights I have been eating pasta in my favorite style of preparation...aglio e olio. And given the heat I've been cooking my dinner in my makeshift outdoor kitchen in the back yard and eating it under a grapevine. There is something really special about eating food in the very spot that you grew it. Anyhow, here's a few photos and a basic recipe. 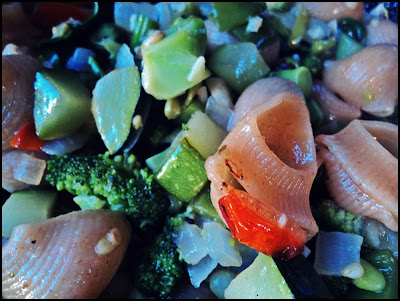 Dice any vegetables that you have at hand, keeping onions, peppers, and others that you want to caramelize (brown) separate from the softer or more delicate ones. Bring a pot of salted water to a boil for which to cook pasta. Heat a liberal amount of olive oil in a heavy skillet over medium-high heat and add any vegetables to brown, such as onions, peppers, carrots, or zucchini. Cook for a few minutes, tossing and turning in the oil until they begin to brown. Add a clove or two of minced garlic and a pinch of hot pepper if you like; continue to cook for a couple minutes. Add a cup or so of chicken broth to the pan  and allow the vegetables to cook and soften as the broth reduces and concentrates. Meanwhile cook whatever pasta you like in the boiling water (slightly under cook it). Add softer vegetables to the pan--those that you don't wish to caramelize--such as broccoli, green beans, spinach, tomatoes. Add a small addition of broth if necessary, along with a pinch of salt. When the vegetables are cooked and soft, and the broth has reduced and made a flavorful sauce, drain the past and add it to the vegetables. Gently shake the pan to toss the vegetables, broth, and pasta together. Allow the past to finish cooking and absorb some of the broth and flavors. Just before remove the pan from the heat stir in coarsely chopped basil leaves and grated Parmesan cheese. 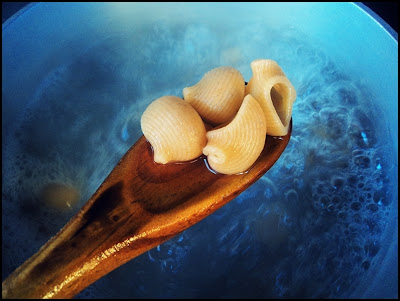 WNY Liberal said…
Do you do any canning? If so, how long do your veggies last you until you have to start buying them from the store?
July 12, 2012 at 9:41 AM