The View from My Handlebars, the Lunatic Behind me, and a few Thoughts on Article 34 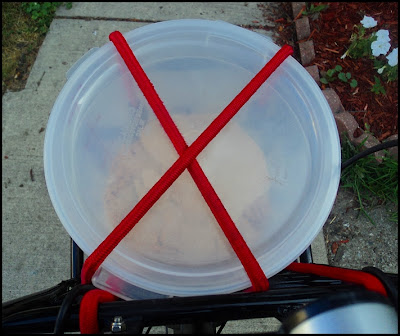 So there I was at the corner of Allen and Franklin Streets waiting for the light to change so I could make a left hand turn. It was already balmy. I had a bucket of just-mixed raw bread dough on my front rack (pictured above), which I bake at work during the hot weather so I don't have to heat up my teeny home kitchen (the ovens are on all day at work anyhow). And as I stood straddling my bike I was enjoying the balmy weather but--I have to admit--dreading going to work in a hot kitchen. I was sort of daydreaming, I suppose, and glanced down at the bucket of dough thinking I'll refrigerate it when I get to work (the heat and humidity would make it rise too quickly, resulting in a young dough). It was a little after 8am and not many cars on the narrow street. I heard a car approach behind me so I held out my left arm, indicating to the driver that I was turning left. And that's when I heard it, first the horn then the yelling.

HOONNK...HONNNK! GET OUTTA THE ROAD!

Startled at first, then I turned in disbelief..maybe, I thought, this was not directed at me. But I was wrong. So I pointed towards the corner and yelled back "I'm turning left"...only to be met with:

HONNNNK...HOOONNNK! GET OUTTA THE MIDDLE OF THE ROAD!

The bumper to her car was just a few feet behind me, I have to say it made me a bit nervous. But here's the best part:

The traffic light hadn't even changed yet, if I was not in front of her she wouldn't be going anywhere.

Now my blood pressure was beginning to rise, but I kept my composure. I calmly turned the bike around and went to her car window. The middle aged woman that was behind the wheel was like a caricature of a crazy-mad driver...there seemed to be spirals in her eyes and smoke coming from her nose and ears. I went directly to the window--didn't raise my voice but I'm sure I had a "tone"--and told her that the bike that I was on was a street legal vehicle and had the same rights as her car, and that I was using hand signals, following the law, and had every right to be where I stood. For a second her eyes seemed to roll in back of her head, then she spat: "Get outta the road!" and then hit the gas (the light had changed). When she took off, making a left turn as well, her car nearly swiped me and if I didn't remove my foot from her tire's path it may have been ran over.

If I had a dollar for every time a person told me to get out of their way, get off the road, or on the sidewalk (pavements to my friends across the pond) I would be a "monetarily wealthy" person (and I purposely put quotes on monetarily wealthy because I believe there are many other ways to be wealthy than having buckets of cash).

Anyhow, and contrary to many motorists belief (and some bicyclists, I suppose), adults on bikes belong on the road and it is, in fact, illegal for an adult in New York State to ride a bicycle on the sidewalk. This got me thinking about other legalities and rights, and it didn't take me long to find them. Here's a couple snippets, to read the entire page on bicycle laws in New York State click here. And yes, I realize I'm likely preaching to the choir but I just had to vent. Thanks for listening. The italics and some of the bold lettering in the below quotes were placed by me.

Every person riding a bicycle or skating or gliding on in-line skates upon a roadway shall be granted all of the rights and shall be subject to all of the duties applicable to the driver of a vehicle by this title, except as to special regulations in this article and except as to those provisions of this title which by their nature can have no application. 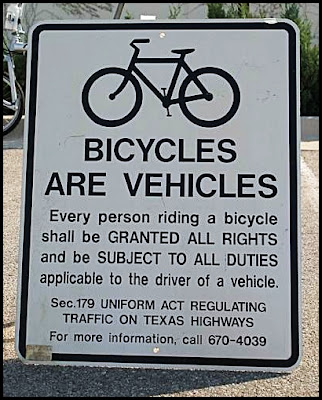 Yes, I live a long way from Texas--where the above sign is designated--but I came across the sign recently (can't remember where) and love it...and I wish there were some of these around NY State. It is, I think, good, really good to know your rights. But sometimes, such as when there is a lunatic in a large car directly behind you, it doesn't make a difference. I'm sure if someone saw me immediately after my encounter I would have looked visibly shaken. I only had another city block to pedal before I arrived at work. As I pedaled a phrase from Mahatma Gandhi came to mind...

Be the change you want to see.

And this is what I thought about when I turned into my place of work and could see that just a few hundred feet down the road the woman who needed me "outta her way" so badly was stopped at the very next traffic signal.

Anonymous said…
I actually had a police officer tell my class that they should ride their bikes on the sidewalk and he didn't know why people had the idea that they should ride on the road. I just looked up Florida bicycle laws - ya, he told them the complete opposite of what the law says. So if the police in my neck of the woods can't get it straight, we can't expect the general public to figure it out. Florida, Texas and NY all have similar bicycle laws. And nobody seems to know what they are. I do love the TX road sign!
July 19, 2012 at 10:02 PM

Joe George said…
QD...yes it is frustrating...between the motorists and bicyclists no one seems to know what's going on. And the bicyclists that break every law in the book don't make it any easier.
July 25, 2012 at 9:56 PM