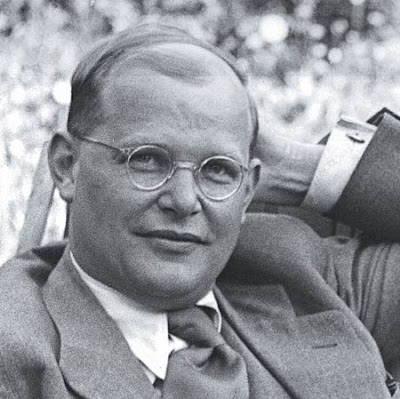 Dietrich Bonhoeffer was of course a German theologian and pastor who was anti-war and anti-Nazi and ultimately was executed by the Nazis for his involvement in the group known as Abwehr. I've read that in a last act of humiliation he was forced to walk entirely naked to the gallows, which was nearly a mile away. Here's a moving account of his last hours as recorded by the doctor who was present:

The camp doctor who witnessed the execution wrote: “I saw Pastor Bonhoeffer... kneeling on the floor praying fervently to God. I was most deeply moved by the way this lovable man prayed, so devout and so certain that God heard his prayer. At the place of execution, he again said a short prayer and then climbed the few steps to the gallows, brave and composed. His death ensued after a few seconds. In the almost fifty years that I worked as a doctor, I have hardly ever seen a man die so entirely submissive to the will of God.”
(source)

“The ultimate test of a moral society is the kind of world that it leaves to its children.”

“Judging others makes us blind, whereas love is illuminating. By judging others we blind ourselves to our own evil and to the grace which others are just as entitled to as we are.”

“We are not to simply bandage the wounds of victims beneath the wheels of injustice, we are to drive a spoke into the wheel itself.”

“In normal life we hardly realize how much more we receive than we give, and life cannot be rich without such gratitude. It is so easy to overestimate the importance of our own achievements compared with what we owe to the help of others.”

“Action springs not from thought, but from a readiness for responsibility.”

“Silence in the face of evil is itself evil: God will not hold us guiltless. Not to speak is to speak. Not to act is to act.”

To read more in the Five Quotes series, click here.

Door to Bangalore said…
I am currently reading Bonhoeffer's biography by Eric Metaxas. Thoroughly enjoying it, thanks for sharing some quotes I had not heard.
August 19, 2012 at 10:13 PM