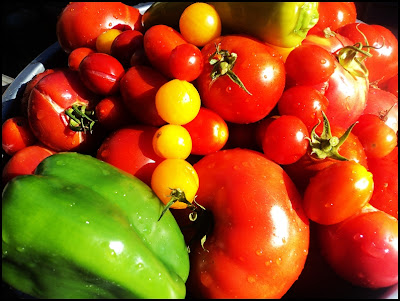 As summer begins to wind down the tomatoes and peppers are coming to full fruition. And one of the rewards each summer is tomato sauce. I make it a few times throughout the season and then usually one bigger pot...which was today. I made about 3 gallons of sauce "hillbilly style" (cooked it outside as not to heat up the kitchen). And I've mentioned before that for me cooking things from the garden outside is extra special (does it taste better or am I imagining it) because when I cook it outside it is being cooked just a few feet from where it grew. As the sauce was simmering I sauteed a couple pieces of fish then braised it in the tomato sauce and ate it (tossed with pasta) under grapevines while listening to NPR (and yelling at my pugs to stop jumping up at the table). Anyhow, the sauce is presently cooling in my fridge. In the next day or two I'll package it in increments and freeze it for the off-season. And eating sauce in the middle of winter--which I made from scratch using tomatoes and peppers that grew in the front/back yards--that is the real reward for the time and care it takes to grow (some of) my own food. 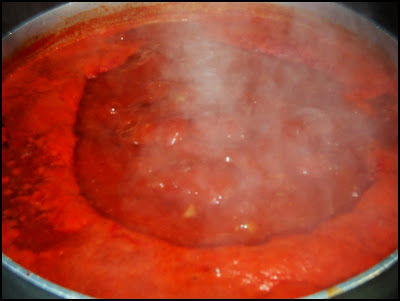