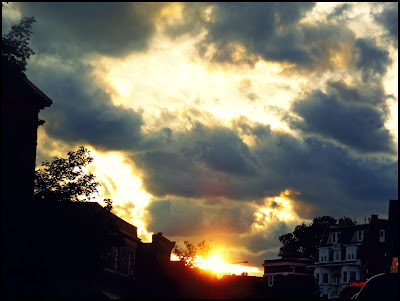 I was on my way home this evening and stopped to snap this photo. I love the autumn and was so taken by this scene I literally stopped in the middle of the street and snapped a few photos. And I've stated many times, one of the many things I enjoy about being on a bike (opposed to being in a car) is the total experience. Yes, of course you would see this same scene through your windshield, but at the same time it would not be the same. You would be protected from the elements...which are all part of our life, right? I was on Allen Street in the Allentown section of Buffalo, looking west over Days Park and the West Side, and then farther over Lake Erie from where those clouds were coming. As I stood I felt the cool autumn breeze on my face and heard the sounds of the street around me. I watched as the sun set and the thick grey clouds rolled past overhead. I sold my truck about six months ago and have not regretted it for a minute (especially with the local petrol prices), but being car-free is simple in the easy months. Western New York is known for its harsh winters, but last winter was very mild. I have a feeling this winter will be extreme in one way or another...either really mild again or really harsh. I felt good--as I straddled my bike and felt the breeze on my face and through my thin jacket. But I also felt a bit concerned as I watched those thick clouds roll by. There's a saying in Buffalo that says, "If you don't like the weather wait a minute." A month from now those clouds may be dumping us with snow. I've ridden year-round for many years now but have often had a car or truck for when the snow was too deep or worse when it was a virtual white out. But not this year...and I'm not 20 or 30 (or even 40) years young any longer. This year will be the test. And this is what I was thinking as I stood straddling my bike on a cool autumn evening watching the clouds roll by over the beautiful sunset. But the snow is not here yet, so for now this was enough...to just sit and be in the moment.