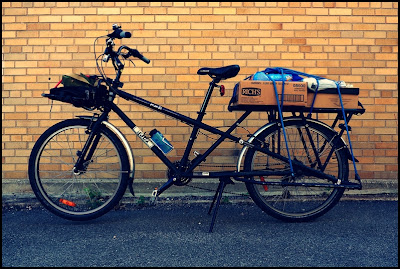 I've been car-free for over 4 months now, not counting being a member of Buffalo Car Share (which I've only used three times...not bad, three times in four months). For the most part being car-free is relatively easy for me, but I have to say, some days it can be a bit trying. It was hot today (86F/30C) as it has been all summer, and today it was really humid as well. It's the humidity that really makes it tough...the air was hazy and actually felt thick. One of the stores I went to was about 5 miles/8 kilometers from my house. This is not a great distance but on a hot and humid day it was a bit tough. On the way home I stopped for a beer at a local bar to cool off. After ordering the beer the barkeep looks at me--and the sweat running down my face--and says, "Do you want a glass of water also?" Which of course I did. If this is the new norm--hot, humid, and rainless all summer--I'll have to make some changes. Maybe do longer trips in the morning or evening, not at the peak of the day like I did today. But then again, a few months from now I'll be squawking about how cold it is. Anyhow, I'd be interested to hear how others have handled the heat this summer on a bike.