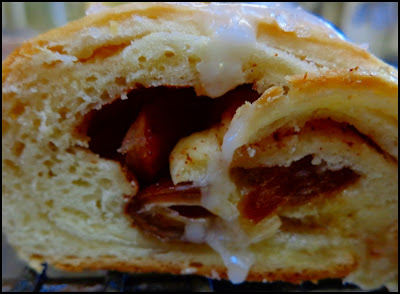 Like many Americans, ancestrally speaking I am a mixed breed. My dad's family is Lebanese—straight from the “Old Country”—hence the Lebanese-inspired recipes on this blog. My mom's family is German (with maybe a bit of French, too...my grandfather's family was Alsatian); they've been in this country since about 1830 the best that I can tell. And this—I believe—is where I inherited my love of baking; from my mom's good baking.

When I think of Thanksgiving and Christmastime as a child my mind’s eye sees these memories through rose colored glasses...it looks sort of like a Norman Rockwell painting. We were poor, that’s for sure (not that I realized it then), but there was always plenty of food…especially homemade baked goods.

My mother—like many Buffalonians of German decent—grew up on Buffalo’s east side. She took pride in her baking skills, and even though she had a houseful of kids and worked full time she still managed to bake mountains of cookies and trays of kuchen for the holidays. Kuchen (pronounced kooken) is the German word for cake, and is more closely related to coffee cake than they are traditional cake or flaky pastry. I’m sure there are as many variations as there are those who make them. But this is about the one I grew up with.

I made kuchen at work the other day, and whenever I make it—and especially when I eat it—memories come flooding back. I made them in straight logs so they were easy to slice, but those that my mom made were always in a ring shape.

What’s distinctly unique about kuchen to many other coffee cakes is that it’s made with yeast-leavened dough rather than a chemically-leavened batter (quick bread). And though the dough is rolled flat, filled, and rolled into a log or crescent, it’s not a strudel because strudel utilizes a buttery unleavened flaky dough that more close resembles phyllo.

I can still picture the brown terracotta bowls resting on the radiator with a towel shrouding the pillow-like dough. I was told not to touch the bowl or leave the kitchen door open too long, lest it become drafty and the dough fall. It was such a mystery, seeming almost magical, how the dough would grow. It may be then that my fascination with yeast dough was first planted.

My mother learned to make the dough from her mother, who likely learned it from her mother, and so on. The handwritten recipe that was given one of my sisters and then to me was simply titled “foundation dough,” because it’s a basic one that can be used for a number of other things including the famous German doughnut, fastnachts (click here for the recipe), which are eaten on Shrove Tuesday just before Lent. Fillings for kuchen are left up to the baker and can encompass a wide variety of sweet ingredients (fresh or dried fruits, nuts, chocolate) just as long as the dough is first layered with melted butter, sugar, and cinnamon. The kuchen in the photos was made with dried dates, but my favorite is the one listed in the recipe below...cherry and walnut. Yum! 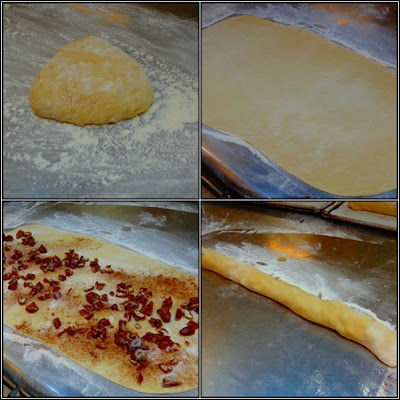 To make the dough, combine the water, milk, sugar, yeast, and two cups of flour in a large bowl. Allow to rest for 1 hour, or until the yeast is fully active. Transfer to an upright mixing bowl with a dough hook. Add the eggs, melted butter, salt, and 4 cups of flour. Run the mixer on low for 1 minute (if the dough seems too sticky add the remaining cup flour) then turn to medium and knead for 5 minutes. Transfer to a lightly oiled bowl, cover and let rest at room temperature for about an hour, or until double in size. Preheat an oven to 350F. Transfer the dough to a floured work surface and cut into three pieces. Shape into balls, cover and let rest 20 minutes. Roll into large ovals about 1/4 inch thick. Brush with melted butter and sprinkle liberally with sugar and cinnamon. Sprinkle with cherries and walnuts. Roll into logs then shape into crescents. Transfer to baking sheets lined with oiled parchment. Brush the with the egg/milk mixture and sprinkle with poppy seeds. Make small slices about every two inches. Bake for 20-30 minutes, or until a skewer pulls out clean. Transfer to a wire rack and cool 15 minutes. Mix powdered sugar with just enough milk to make an icing the consistency of heavy cream. Drizzle over the kuchen and let dry for 15 minutes before slicing. 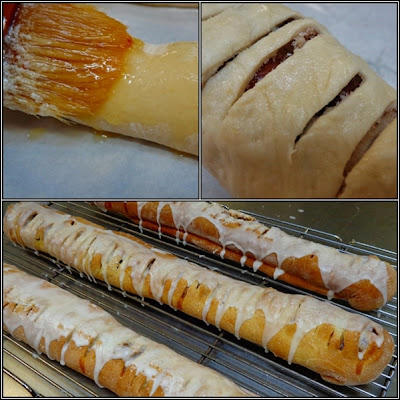